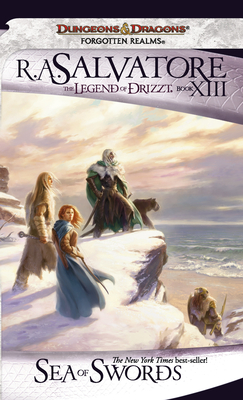 This is book number 13 in the The Legend of Drizzt series.

New York Times–bestselling series: Drizzt and the Companions set out to save their imperiled friend in this fast-moving adventure in the Legend of Drizzt saga

When the mark of Wulfgar’s legendary warhammer is found on the person of pirate Sheila Kree, Drizzt Do’Urden knows his friend is in dire need of his help. Thus, Drizzt, Catti-brie, Regis, and Bruenor spring into action, determined to save Wulfgar and recover Aegis-fang once and for all. But the road to victory is paved with monsters—from goblins and ogres to Wulfgar’s own personal demons.

Meanwhile, Wulfgar is also searching for Aegis-fang. Hot on the trail of Sheila Kree and her new follower, Le'lorinel—a moon elf and a lifelong hater of Drizzt—he will soon encounter the Companions of the Hall in a startling reunion. Together, they will fight side by side in the last battle for Wulfgar's heart and soul.

Sea of Swords is the third book in the Paths of Darkness series and thirteenth installment in the Legend of Drizzt. It was formerly the fourth book in Paths and fourteenth book in Drizzt before The Servant of the Shard was moved to the Sellswords Trilogy.

This feature require that you enable JavaScript in your browser.
END_OF_DOCUMENT_TOKEN_TO_BE_REPLACED

This feature require that you enable JavaScript in your browser.
END_OF_DOCUMENT_TOKEN_TO_BE_REPLACED

This feature require that you enable JavaScript in your browser.
END_OF_DOCUMENT_TOKEN_TO_BE_REPLACED