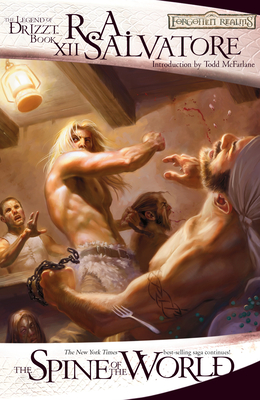 This is book number 12 in the The Legend of Drizzt series.

Spending just one day in the torture chambers of the Abyss would be enough to break even the heartiest soul. Wulfgar of Icewind Dale was there for six miserable years. Though Wulfgar has since been freed, he is still haunted by the memories of the pain he endured at his captor Errtu's hands. Hoping to distance himself from his past, he flees to the faraway port city of Luskan—but in so doing, isolates himself from his friends and develops an unhealthy penchant for booze.

For Wulfgar, things get worse before they get better. Fired from his gig at a tavern, robbed of his warhammer, and accused of murder, he goes on the run with Morik the Rogue—beginning a dangerous, combat-filled journey toward his redemption.

The Spine of the World is the second book in the Paths of Darkness series and the twelfth installment in the Legend of Drizzt series.

This feature require that you enable JavaScript in your browser.
END_OF_DOCUMENT_TOKEN_TO_BE_REPLACED

This feature require that you enable JavaScript in your browser.
END_OF_DOCUMENT_TOKEN_TO_BE_REPLACED

This feature require that you enable JavaScript in your browser.
END_OF_DOCUMENT_TOKEN_TO_BE_REPLACED