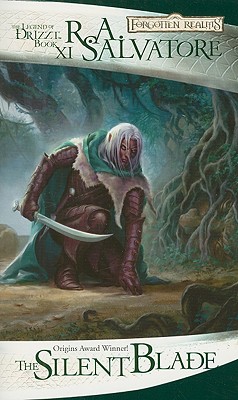 This is book number 11 in the The Legend of Drizzt series.

A new chapter in the Legend of Drizzt saga begins: Can the Crystal Shard be destroyed at last?

Determined to destroy the evil Crystal Shard, Drizzt seeks out the help of a scholar-priest named Cadderly. But instead, his worst fears are realized when the artifact falls into the hands of the dark elf mercenary Jarlaxle and his unlikely ally Artemis Entreri.

Drizzt’s friends also experience their own hardships: Wulfgar, now freed from Errtu’s clutches, struggles with anger and bloodlust. Only in the far reaches of Luskan can he find solace from the torments that haunt him. Meanwhile, Regis’ ruby pendant—once the property of his old master, Pasha Pook—seems to be a magnet for all things evil and wicked . . .

The Silent Blade is the first book in the Paths of Darkness series and the eleventh book in the Legend of Drizzt series.

This feature require that you enable JavaScript in your browser.
END_OF_DOCUMENT_TOKEN_TO_BE_REPLACED

This feature require that you enable JavaScript in your browser.
END_OF_DOCUMENT_TOKEN_TO_BE_REPLACED

This feature require that you enable JavaScript in your browser.
END_OF_DOCUMENT_TOKEN_TO_BE_REPLACED