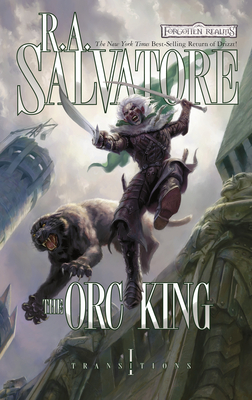 This is book number 20 in the The Legend of Drizzt series.

The end of winter is near, and it seems the uneasy peace between the dwarves of Mithral Hall and the orcs of the newly established Kingdom of Many-Arrows will not last long. The orc tribes united under Obould are splintering, with some seeking to establish an alliance with a clan of half ogres-half orcs. Drizzt, too, feels himself torn apart, unsure which of the Companions needs him most: As Catti-brie recovers from a serious injury, Wulfgar mourns the death of his wife. Together, the broken pair leaves Mithral Hall for Silverymoon, hoping to find a trail that leads to Wulfgar’s lost adopted daughter. Meanwhile, Bruenor begins his own desperate search. Determined to end the war that nearly cost him his life and everything he has built, he will stop at nothing until he finds the ancient dwarven city of Gauntlgrym.

But to truly end the war, drastic changes must be made. Powerful individuals on both sides may have to alter the way they see each other—and perhaps even talk to one another—for it will take more than swords and axes to bring a lasting peace to the Spine of the World.

The Orc King is the first book in the Transitions series and the twentieth installment in the Legend of Drizzt series.

This feature require that you enable JavaScript in your browser.
END_OF_DOCUMENT_TOKEN_TO_BE_REPLACED

This feature require that you enable JavaScript in your browser.
END_OF_DOCUMENT_TOKEN_TO_BE_REPLACED

This feature require that you enable JavaScript in your browser.
END_OF_DOCUMENT_TOKEN_TO_BE_REPLACED