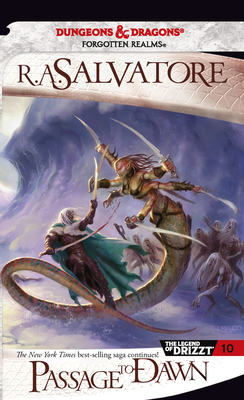 This is book number 10 in the The Legend of Drizzt series.

It has been six years since the fateful Battle of Mithral Hall; six long years during which Drizzt Do’Urden and Catti-brie have been away from the only place they ever truly felt at home. The pain of a lost companion still weighs heavily on their strong shoulders, but chasing pirates aboard Captain Deudermont's Sea Sprite has been enough to draw their attention away from their grief.

But when a mysterious castaway on an uncharted island appears bearing a strange message, Drizzt and Catti-brie are sent back to the very source of their pain—and into the clutches of a demon with vengeance on his mind.

This feature require that you enable JavaScript in your browser.
END_OF_DOCUMENT_TOKEN_TO_BE_REPLACED

This feature require that you enable JavaScript in your browser.
END_OF_DOCUMENT_TOKEN_TO_BE_REPLACED

This feature require that you enable JavaScript in your browser.
END_OF_DOCUMENT_TOKEN_TO_BE_REPLACED