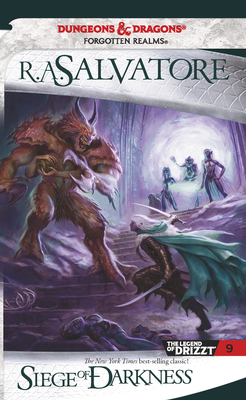 This is book number 9 in the The Legend of Drizzt series.

While Mithral Hall teems with whispers of the war to come, chaos erupts both above and below ground. On the surface of Faerûn, the first signs of the Time of Troubles make themselves known, forcing deities to assume their mortal forms. Beneath them in the Underdark, all but one drow house has lost their magical powers, and Lolth has handed the reins of leadership over to the demon Errtu.

But even this turmoil cannot keep the drow from rising up from the black depths of the Underdark to battle the dwarves of Mithral Hall. Bruenor Battlehammer, with Drizzt at his side, will not go down without a fight—but they will have to fight without Wulfgar and Catti-brie at their sides.

This feature require that you enable JavaScript in your browser.
END_OF_DOCUMENT_TOKEN_TO_BE_REPLACED

This feature require that you enable JavaScript in your browser.
END_OF_DOCUMENT_TOKEN_TO_BE_REPLACED

This feature require that you enable JavaScript in your browser.
END_OF_DOCUMENT_TOKEN_TO_BE_REPLACED