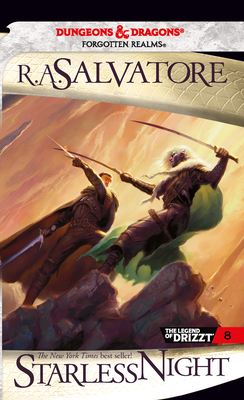 This is book number 8 in the The Legend of Drizzt series.

To protect his friends from harm, Drizzt Do’Urden returns to the place he left behind long ago—the City of Spiders

Though Drizzt is still reeling from the death of his barbarian friend, he is allowed little time to grieve. Dark elves are gathering in the caverns deep under Mithral Hall, hell-bent on destruction. To keep his adopted home and family safe, Drizzt must now return to the dreadful drow city of his birth.

Nicknamed the City of Spiders, Menzoberranzan is one of the most dangerous places in the already perilous Underdark. For Drizzt, a rogue elf with a price on his head, stepping foot inside the city is no small risk—it’s certain death. But Drizzt Do'Urden and his companions are no strangers to such dire circumstances. Driven by their love and loyalty to the dwarves of Mithral Hall, they will engage the dark elves in combat and willingly lay down their lives . . .

This feature require that you enable JavaScript in your browser.
END_OF_DOCUMENT_TOKEN_TO_BE_REPLACED

This feature require that you enable JavaScript in your browser.
END_OF_DOCUMENT_TOKEN_TO_BE_REPLACED

This feature require that you enable JavaScript in your browser.
END_OF_DOCUMENT_TOKEN_TO_BE_REPLACED