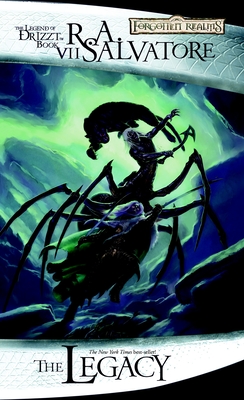 This is book number 7 in the The Legend of Drizzt series.

Having found a measure of peace among the dwarves in Mithral Hall, Drizzt Do’Urden begins to know contentment for the first time in his tumultuous life. Bruenor has reclaimed his throne, Regis has been freed from Artemis Entreri, and Wulfgar is to be wed. But for a dark elf renegade that hails from the Underdark—a city of ruthless drows, all ruled by priestesses of the demon goddess Lolth—no peace can last forever.

It is Lolth herself, the dreaded Queen of the Demonweb Pits, who musters her followers to pour up from the black depths of the Underdark to reclaim the one soul that managed to elude her: the soul of Drizzt Do'Urden.

This feature require that you enable JavaScript in your browser.
END_OF_DOCUMENT_TOKEN_TO_BE_REPLACED

This feature require that you enable JavaScript in your browser.
END_OF_DOCUMENT_TOKEN_TO_BE_REPLACED

This feature require that you enable JavaScript in your browser.
END_OF_DOCUMENT_TOKEN_TO_BE_REPLACED