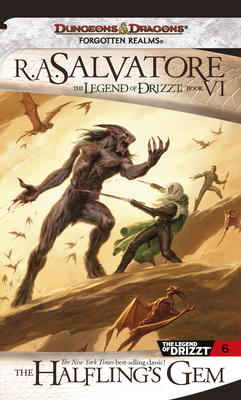 This is book number 6 in the The Legend of Drizzt series.

Artemis Entreri has taken Regis back to his former master, Pasha Pook—but Drizzt Do’Urden and Wulfgar are fast on the assassin’s heels. Armed with the scimitar Twinkle, Drizzt defeats a banshee and acquires an enchanted artifact that masks its wearer’s true identity. With Drizzt now disguised as a normal elf, the duo continues their journey, traveling from Waterdeep to Baldur’s Gate, and beyond, in search of their friend.

Meanwhile, Entreri is always one step ahead, aided by the magical gem Regis once stole from Pasha Pook. Together, Regis’ captors thwart Drizzt and Wulfgar’s mission at every turn, cornering them into battles with pirates, treks through the Calimshan deserts, and encounters with otherwordly monsters. But will it be enough to stop them from rescuing Regis?

The Halfling’s Gem is the third book in the Icewind Dale Trilogy and the sixth book in the Legend of Drizzt series.

This feature require that you enable JavaScript in your browser.
END_OF_DOCUMENT_TOKEN_TO_BE_REPLACED

This feature require that you enable JavaScript in your browser.
END_OF_DOCUMENT_TOKEN_TO_BE_REPLACED

This feature require that you enable JavaScript in your browser.
END_OF_DOCUMENT_TOKEN_TO_BE_REPLACED