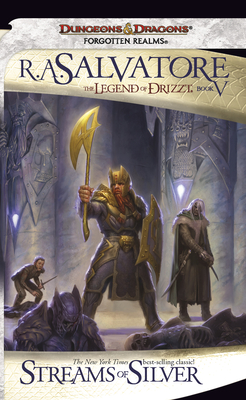 This is book number 5 in the The Legend of Drizzt series.

Drizzt Do'Urden still struggles with his own inner voices, voices that call him back to the pitless depths of the Underdark. But louder still are the voices of his newfound friends Bruenor, Wulfgar, and Regis—and the call of a dream that, at long last, Bruenor has decided to fulfill.

Long ago, Bruenor and his people were driven from their home in Mithral Hall by a shadow dragon of the Underdark. Now, Bruenor is determined to reclaim his homeland and his rightful seat as its king. Aided by the combined might of his friends, Bruenor sets out on a treacherous quest for Mithral Hall, finding obstacles at every turn. But despite the terrors of the Trollmoors and the racism aimed at Drizzt, the group continues to fight—together.

Streams of Silver is the second book in the Icewind Dale Trilogy and the fifth book in the Legend of Drizzt series.

This feature require that you enable JavaScript in your browser.
END_OF_DOCUMENT_TOKEN_TO_BE_REPLACED

This feature require that you enable JavaScript in your browser.
END_OF_DOCUMENT_TOKEN_TO_BE_REPLACED

This feature require that you enable JavaScript in your browser.
END_OF_DOCUMENT_TOKEN_TO_BE_REPLACED