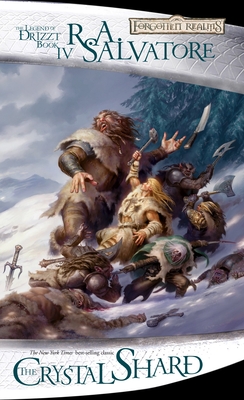 This is book number 4 in the The Legend of Drizzt series.

Drizzt Do’Urden finds new friends and foes in the windswept towns of Icewind Dale, also the setting of the D&D adventure book Rime of the Frostmaiden

With his days in the Underdark far behind him, drow ranger Drizzt Do’Urden sets down roots in the windswept Ten-Towns of Icewind Dale. A cold and unforgiving place, Ten-Towns sits on the brink of a catastrophic war, threatened by the barbarian tribes of the north.

It’s in the midst of battle that a young barbarian named Wulfgar is captured and made the ward of Bruenor, a grizzled dwarf leader and a companion to Drizzt. With Drizzt’s help, Wulfgar will grow from a feral child to a man with the heart of a dwarf, the instincts of a savage, and the soul of a hero. But it will take even more than that to defeat the corrupt wizard who wields the demonic power of Crenshininbon—the fabled Crystal Shard.

The Crystal Shard is first book in the Icewind Dale Trilogy and the fourth book in the Legend of Drizzt series.

This feature require that you enable JavaScript in your browser.
END_OF_DOCUMENT_TOKEN_TO_BE_REPLACED

This feature require that you enable JavaScript in your browser.
END_OF_DOCUMENT_TOKEN_TO_BE_REPLACED

This feature require that you enable JavaScript in your browser.
END_OF_DOCUMENT_TOKEN_TO_BE_REPLACED