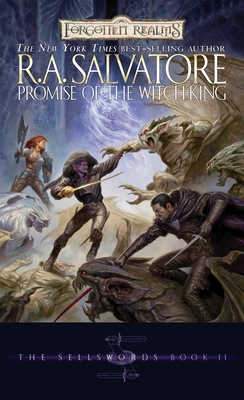 This is book number 15 in the The Legend of Drizzt series.

Entreri and Jarlaxle find themselves in the Bloodstone Lands, caught between the ghost of a power-mad lich and the fury of an oath-bound knight

One of the long-lost books of the late Witch-King, Zhengyi, has been found. Its pages promise unimaginable powers—and the threat of death. But even the fact that the book kills anyone foolish enough to crack its cover does not stop people from fight over it . . .

Human assassin Artemis Entreri and his dark elf companion Jarlaxle have come to the demon-haunted wastelands of the frozen north at the request of their dragon patron. It doesn’t take long for them to find themselves trapped in the middle of a struggle between powerful forces that would like nothing more than to see them both dead—or worse. But Entreri and Jarlaxle aren’t just any wandering sellswords, and the ancient evils and bitter blood-feuds of the wild Bloodstone Lands may have finally met their match.

Promise of the Witch-King is the second book in the Sellswords trilogy and the fifteenth book in the Legend of Drizzt series.

This feature require that you enable JavaScript in your browser.
END_OF_DOCUMENT_TOKEN_TO_BE_REPLACED

This feature require that you enable JavaScript in your browser.
END_OF_DOCUMENT_TOKEN_TO_BE_REPLACED

This feature require that you enable JavaScript in your browser.
END_OF_DOCUMENT_TOKEN_TO_BE_REPLACED