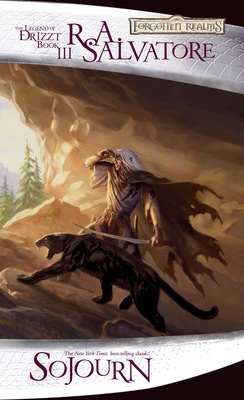 This is book number 3 in the The Legend of Drizzt series.

After years spent in the ruthless confines of the Underdark, Drizzt Do’Urden has emerged from the subterranean society of his youth to start a new life. Accompanied by his loyal panther, Drizzt begins exploring the surface of Faerûn, a world unlike any he has ever known. From skunks to humanoids to shapeshifters, Faerûn is full of unfamiliar races and fresh dangers, which Drizzt must better understand if he is to survive.

But while Drizzt acts with the best intentions, many of the surface dwellers regard him with fear and distrust. Can he manage to find faithful allies in this foreign land—or is he doomed to be a lonely outsider, just as he was in the Underdark?

Sojourn is the third book in the Dark Elf Trilogy and the Legend of Drizzt series.

This feature require that you enable JavaScript in your browser.
END_OF_DOCUMENT_TOKEN_TO_BE_REPLACED

This feature require that you enable JavaScript in your browser.
END_OF_DOCUMENT_TOKEN_TO_BE_REPLACED

This feature require that you enable JavaScript in your browser.
END_OF_DOCUMENT_TOKEN_TO_BE_REPLACED