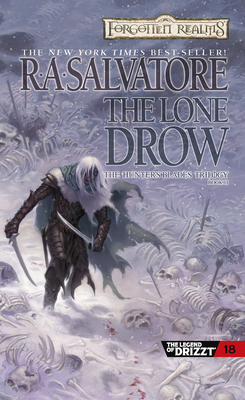 This is book number 18 in the The Legend of Drizzt series.

Devastated by the loss of his friends, Drizzt Do’Urden resumes his vicious battle against the orc army and King Obould Many-Arrows

Drizzt Do’Urden knows what it means to be alone. As a young drow, he was exiled from his home in the Underdark, reviled and feared by his own kind. Only after an arduous journey to Faerûn did he meet the surface dwellers who accepted him, befriended him, and became his steadfast allies. Now, those friends lie dead beneath a fallen tower, leaving Drizzt more alone than he has ever been before.

Fueled by his rage and sorrow, Drizzt becomes the Hunter—the ultimate enemy of the orc hordes still ravaging the North under King Obould’s command. Convinced that everything he loves has been destroyed, he vows to do nothing except kill, kill, and kill again until there are no enemies left. But in the midst of Drizzt’s days of endless slaughter, a pair of elves appear with their pegasi, a promise of aid—and a spark of hope.

The Lone Drow is the second book in The Hunter’s Blades trilogy and the eighteenth installment in the Legend of Drizzt series.

This feature require that you enable JavaScript in your browser.
END_OF_DOCUMENT_TOKEN_TO_BE_REPLACED

This feature require that you enable JavaScript in your browser.
END_OF_DOCUMENT_TOKEN_TO_BE_REPLACED

This feature require that you enable JavaScript in your browser.
END_OF_DOCUMENT_TOKEN_TO_BE_REPLACED