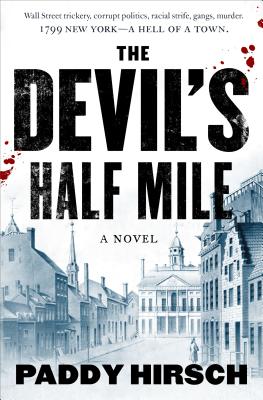 Thanks to Alexander Hamilton, America recovered from the panic on the Devil's Half Mile (aka Wall Street), but the young country is still finding its way. When young lawyer Justy Flanagan returns to solve his father's murder, he exposes a massive fraud that has already claimed lives, and one of the perpetrators are determined to keep secret at any cost. The body count is rising, and the looming crisis could topple the nation.

"A thriller with strong, multifaceted heroes and villains, tight plotting which rattles along in a city where you can smell the horse droppings and hear the authentic voices."—Patrick Taylor, New York Times bestselling author of the Irish Country Doctor series

This feature require that you enable JavaScript in your browser.
END_OF_DOCUMENT_TOKEN_TO_BE_REPLACED

This feature require that you enable JavaScript in your browser.
END_OF_DOCUMENT_TOKEN_TO_BE_REPLACED

This feature require that you enable JavaScript in your browser.
END_OF_DOCUMENT_TOKEN_TO_BE_REPLACED