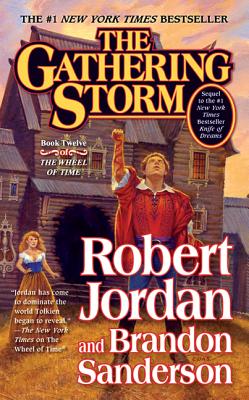 By Robert Jordan, Brandon Sanderson
Email or call for price/availability
Out of Print

Tarmon Gai'don, the Last Battle, looms. And mankind is not ready.

The final volume of the Wheel of Time, A Memory of Light, was partially written by Robert Jordan before his untimely passing in 2007. Brandon Sanderson, New York Times bestselling author of the Mistborn books, and now the Stormlight Archive, among others, was chosen by Jordan's editor--his wife, Harriet McDougal--to complete the final volume, later expanded to three books.

In this epic novel, Robert Jordan's international bestselling series begins its dramatic conclusion. Rand al'Thor, the Dragon Reborn, struggles to unite a fractured network of kingdoms and alliances in preparation for the Last Battle. As he attempts to halt the Seanchan encroachment northward--wishing he could form at least a temporary truce with the invaders--his allies watch in terror the shadow that seems to be growing within the heart of the Dragon Reborn himself.

Egwene al'Vere, the Amyrlin Seat of the rebel Aes Sedai, is a captive of the White Tower and subject to the whims of their tyrannical leader. As days tick toward the Seanchan attack she knows is imminent, Egwene works to hold together the disparate factions of Aes Sedai while providing leadership in the face of increasing uncertainty and despair. Her fight will prove the mettle of the Aes Sedai, and her conflict will decide the future of the White Tower--and possibly the world itself.

Brandon Sanderson grew up in Lincoln, Nebraska. He lives in Utah with his wife and children and teaches creative writing at Brigham Young University. He is the author of such bestsellers as the Mistborn® trilogy and its sequels, The Alloy of Law, Shadows of Self, and The Bands of Mourning; the Stormlight Archive novels The Way of Kings and Words of Radiance; and other novels, including The Rithmatist and Steelheart. In 2013, he won a Hugo Award for Best Novella for The Emperor's Soul, set in the world of his acclaimed first novel, Elantris. Additionally, he was chosen to complete Robert Jordan's Wheel of Time® sequence.

This feature require that you enable JavaScript in your browser.
END_OF_DOCUMENT_TOKEN_TO_BE_REPLACED

This feature require that you enable JavaScript in your browser.
END_OF_DOCUMENT_TOKEN_TO_BE_REPLACED

This feature require that you enable JavaScript in your browser.
END_OF_DOCUMENT_TOKEN_TO_BE_REPLACED