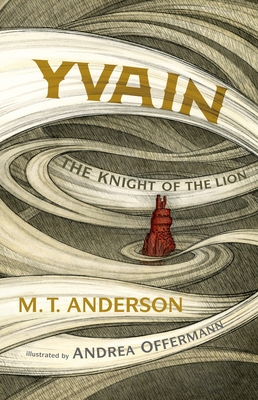 Eager for glory and heedless of others, Sir Yvain sets out from King Arthur’s court and defeats a local lord in battle, unknowingly intertwining his future with the lives of two compelling women: Lady Laudine, the beautiful widow of the fallen lord, and her sly maid Lunette. In a stunning visual interpretation of a 12th century epic poem by Chrétien de Troyes, readers are — at first glance — transported into a classic Arthurian romance complete with errant knights, plundering giants, and fire-breathing dragons. A closer look, however, reveals a world rich with unspoken emotion. Striking, evocative art by Andrea Offermann sheds light upon the inner lives of medieval women and the consequences Yvain’s oblivious actions have upon Laudine and Lunette. Renowned author M. T. Anderson embraces a new form with a sophisticated graphic novel that challenges Yvain’s role as hero, delves into the honesty and anguish of love, and asks just how fundamentally the true self can really change.

M. T. Anderson is the author of many books for young adults, including most recently Symphony for the City of the Dead: Dmitri Shostakovich and the Siege of Leningrad. He lives in Cambridge, Massachusetts.

Andrea Offermann is a fine artist and the illustrator of many books for children and young adults, including The Midnight Zoo by Sonya Hartnett and The Boneshaker by Kate Milford. She attended the Art Center College of Design in Pasadena, California, and now lives in Germany, where she was born.

"Yvain The Knight Of The Lion," by M.T. Anderson, illustrated by Andrea Offerman, is based on a 12th century epic poem by Chretien de Troyes, the original source of the King Arthur stories…The result is a sharp critique of medieval social strictures, with stunning battle scenes, monsters, and blood.
—The New York Times Book Review

Anderson uses the format's sparseness of text to maximum effect, fashioning a thought-provoking narrative that reflects the grandiosity of Arthurian England while never relinquishing the human element at the core of this story. His perceptive rendering of gender politics within the court is one of the tale's most intriguing features. A compulsively readable and eminently enjoyable retelling that breathes new life into an old classic.
—Kirkus Reviews (starred review)

This adaptation of Chrétien de Troyes’ medieval poem beautifully ties together period art and imagery with stylish visual storytelling...Teens who might balk at reading an epic poem will likely be surprised and delighted by Anderson and Offermann’s thoughtful, entertaining, and provocative presentation of this centuries-old story.
—Booklist

Offermann’s eye-catching illustrations combine modern styles with elements of medieval manuscripts, and emotional close-ups are often used to very dramatic effect. An intriguing selection that will be most appealing to fans of high fantasy and ­Arthurian stories.
—School Library Journal

Among older audiences, this title could spark discussion on a woman’s role in society or the contrast between the friendship of Yvain and Sir Gawain with the object of his desire, Laudine. Realistic, delicately crafted illustrations compliment the story.
—School Library Connection

M.T. Anderson's adaptation of a 12th-century epic poem by Chretien de Troyes...appears in a robust graphic-novel form that highlights the story's stark, poetic refrain: "It is truly a marvel, but I tell you, hatred and love may live cramped together, crouching in the same heart."
—Chicago Tribune

At turns elegant, startling and ironic, this turbulent adventure makes a superb introduction to medieval ideas and storytelling for readers ages 12 and older.
—The Wall Street Journal

END_OF_DOCUMENT_TOKEN_TO_BE_REPLACED

This feature require that you enable JavaScript in your browser.
END_OF_DOCUMENT_TOKEN_TO_BE_REPLACED

This feature require that you enable JavaScript in your browser.
END_OF_DOCUMENT_TOKEN_TO_BE_REPLACED

This feature require that you enable JavaScript in your browser.
END_OF_DOCUMENT_TOKEN_TO_BE_REPLACED