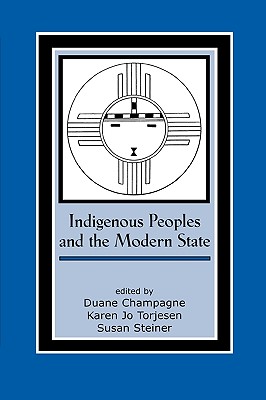 This is book number 14 in the Contemporary Native American Communities series.

Champagne and his distinguished coauthors reveal how the structure of a multinational state has the potential to create more equal and just national communities for Native peoples around the globe. Many countries still face extreme differences among ethnic groups and submerged nations, leading to marginalization and violence. Examining these inherent instabilities in multicultural nations such as the U.S., Canada, Mexico, and Guatemala, the authors confront problems of coerced assimilation for indigenous communities whose identities predate the formation of the nation states, often by thousands of years. The contributors show how indigenous people seek to preserve their territory, their rights to self-government, and their culture. This book is a valuable resource for Native American, Canadian and Latin American studies; comparative indigenous governments; constitutional law; and international relations.

Duane Champagne is Professor of Sociology and Director of the Native Nations Law and Policy Center at the University of California, Los Angeles. Karen Jo Torjesen is Dean of the School of Religion, and Margo L. Goldsmith Professor of Women's Studies in Religion, Claremont Graduate University. Susan Steiner is Associate Vice President for Research and Sponsored Programs at Claremont Graduate University and has received degrees in both literature and religion. She has long been active in civil rights, grass roots community, and political, as well as academic and cultural, issues. A writer, as well as a speaker, she has given workshops throughout the United States and has a novel and play in progress.

This feature require that you enable JavaScript in your browser.
END_OF_DOCUMENT_TOKEN_TO_BE_REPLACED

This feature require that you enable JavaScript in your browser.
END_OF_DOCUMENT_TOKEN_TO_BE_REPLACED

This feature require that you enable JavaScript in your browser.
END_OF_DOCUMENT_TOKEN_TO_BE_REPLACED