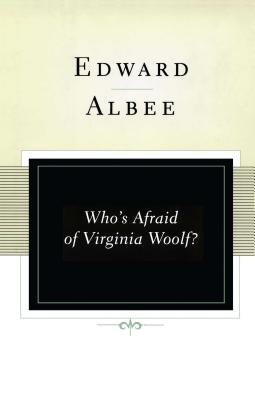 George, a disillusioned academic, and Martha, his caustic wife, have just come home from a faculty party. When a handsome young professor and his mousy wife stop by for a nightcap, an innocent night of fun and games quickly turns dark and dangerous. Long-buried resentment and rage are unleashed as George and Martha turn their rapier-sharp wits against each other, using their guests as pawns in their verbal sparring. By night's end, the secrets of both couples are uncovered and the lies they cling to are exposed. Considered by many to be Albee's masterpiece, Who's Afraid of Virginia Woolf? is a "brilliantly original work of art -- an excoriating theatrical experience, surging with shocks of recognition and dramatic fire" (Newsweek).

Edward Albee, best-known as the author of Who's Afraid of Virginia Woolf? was one of a handful of America’s most important playwrights. He won numerous awards, including three Pulitzer Prizes (for A Delicate Balance, Seascape, and Three Tall Women) and two Tony Awards (Who's Afraid of Virginia Woolf? and A Delicate Balance). He was the recipient of a Kennedy Center Lifetime Achievement Award the National Medal of Arts by President Clinton. He died in 2016 at the age of eighty-eight.

This feature require that you enable JavaScript in your browser.
END_OF_DOCUMENT_TOKEN_TO_BE_REPLACED

This feature require that you enable JavaScript in your browser.
END_OF_DOCUMENT_TOKEN_TO_BE_REPLACED

This feature require that you enable JavaScript in your browser.
END_OF_DOCUMENT_TOKEN_TO_BE_REPLACED