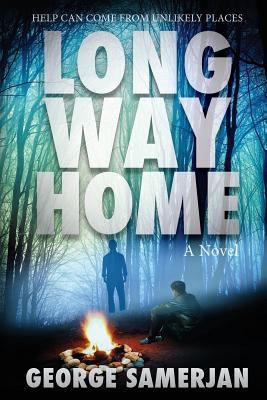 By George Samerjan
$6.99
Usually Ships in 1-5 Days
(This book cannot be returned.)

Brian McAfee, twenty eight, former staff sergeant in the New York National Guard, a veteran of two tours of duty in Iraq, sits in a lawn chair behind his house drinking Bourbon. He and his wife Barbara argue viciously over his not having "gotten over the war." Brian knows at that moment it is time to take his own life to end his pain, and set his family free. Brian drives to Speculator. He will visit a fallen comrade's grave before he kills himself. Barbara finds a note that Brian left. Instantly, she knows what he is about to do, and where he is going. She gets in her car and speeds after him. What follows is a tale of supernatural intervention redeeming the soul of a combat veteran.

The author is a published poet, novelist, screenwriter, and combat veteran. In 2002, he, and co-author David Saperstein, wrote the screenplay for A CHRISTMAS VISITOR. He co-wrote the novel of A CHRISTMAS VISITOR, followed by A CHRISTMAS PASSAGE. LONG WAY HOME - a combat veteran seeks the solace of suicide - and FROM THE SHADOWS - A young man alone in the wilderness flees from killers - were published as e-books in 2013. He has written more than 2,000 poems appearing in numerous publications. His honors and awards include two Bronze Star Medals one with one Oak Leaf Cluster and one with "V" device, the Air Medal, Combat Infantryman Badge, Army Commendation Medal, Vietnamese Cross of Gallantry with Bronze Star, Vietnam Service Medal with Three Bronze Service Stars, and the Republic of Vietnam Campaign Medal. He received an Emmy Award for Outstanding Achievement "Interactive Video Disc" in the Best Training or Information Program Under Fifteen Minutes category. He is a member of the Writers Guild of America. He is a life member of the Disabled Veterans of America, and the Combat Infantrymen's Association.

This feature require that you enable JavaScript in your browser.
END_OF_DOCUMENT_TOKEN_TO_BE_REPLACED

This feature require that you enable JavaScript in your browser.
END_OF_DOCUMENT_TOKEN_TO_BE_REPLACED

This feature require that you enable JavaScript in your browser.
END_OF_DOCUMENT_TOKEN_TO_BE_REPLACED