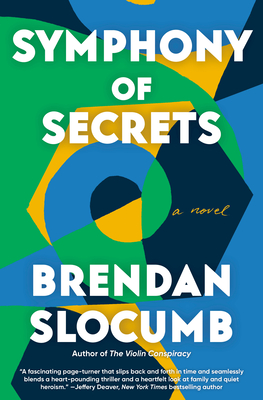 Bern Hendricks is a music professor and a massive fan of composer Fredrick Delany. Delany has all but fallen out of popularity, but his early music is very well respected, and Bern is one of the top experts in Delany’s music. Bern has now been given the call of a lifetime, to head the authenticating of Delany’s infamous lost opera! But, while working with the lost opera, Bern learns some untold truths about Delany’s work and another composer that had been forgotten to the ages. This book is such a wonderful and exciting read for anyone interested in all music, and it is a study in the erasure of black and female composers.

From the celebrated author of book club favorite The Violin Conspiracy: A gripping page-turner about a professor who uncovers a shocking secret about the most famous American composer of all time—that his music was stolen from a young Black composer named Josephine Reed. Determined to uncover the truth and right history’s wrongs, Bern Hendricks will stop at nothing to finally give Josephine the recognition she deserves.

Bern Hendricks has just received the call of a lifetime. As one of the world’s preeminent experts on the famed twentieth-century composer Frederick Delaney, Bern knows everything there is to know about the man behind the music. When Mallory Roberts, a board member of the distinguished Delaney Foundation and direct descendant of the man himself, asks for Bern’s help authenticating a newly discovered piece, which may be his famous lost opera, RED, he jumps at the chance. With the help of his tech-savvy acquaintance Eboni, Bern soon discovers that the truth is far more complicated than history would have them believe.

In 1920s Manhattan, Josephine Reed is living on the streets and frequenting jazz clubs when she meets the struggling musician Fred Delaney. But where young Delaney struggles, Josephine soars. She’s a natural prodigy who hears beautiful music in the sounds of the world around her. With Josephine as his silent partner, Delaney’s career takes off—but who is the real genius here?

In the present day, Bern and Eboni begin to uncover more clues that indicate Delaney may have had help in composing his most successful work. Armed with more questions than answers and caught in the crosshairs of a powerful organization who will stop at nothing to keep their secret hidden, Bern and Eboni will move heaven and earth in their dogged quest to right history’s wrongs.

Brendan Nicholaus Slocumb was raised in Fayetteville, North Carolina, and holds a degree in music education (with concentrations in violin and viola) from the University of North Carolina at Greensboro. For more than twenty years he has been a public and private school music educator and has performed with orchestras throughout Northern Virginia, Maryland, and Washington, DC.

"Music lovers will revel in Symphony of Secrets, a novel that is at once a celebration of music and also a cautionary tale about legacy, privilege, and creative genius."
—Nita Prose, #1 New York Times bestselling author of The Maid

"With Symphony of Secrets, Slocumb has woven an incredible thriller about music, genius, history, and greed—and how easily innocent passion can turn to dangerous, deadly obsession. You won’t be able to put it down until the last note!"
—Peng Shepherd, author of The Cartographers

"Absolutely brilliant! Once again, Slocumb’s consummate skills are on vivid display as he gives us a fascinating page-turner that slips back and forth in time and seamlessly blends a heart-pounding thriller, a heartfelt look at family and quiet heroism, and a searing exposé of issues stretching from deep in our country’s past to the very present. The 'secret' of his title is apt indeed. And as for the cast: nobody creates rich, fully formed characters like Brendan Slocumb. Some books we finish and move on. This one will stay with you long after you turn the final page.
—Jeffery Deaver, New York Times bestselling author of The Bone Collector and Hunting Time

"Both a beautiful, joyful, celebration of music and the people who love it, and a chilling portrait of how easily good slides into evil—and echoes through the years. I loved this book."
—Sara Gran, author of The Book of the Most Precious Substance

“Brendan Slocumb’s Symphony of Secrets is a wonderfully compelling page-turner that’s so authentic you’ll swear that Slocumb himself was part of the 1920s Manhattan music scene. Slocumb's musical background along with his unique characters and gorgeous prose create a fascinating story of astonishing talent and extraordinary deceit. I loved this book!”
—Karen Dionne, #1 internationally bestselling author of The Marsh King’s Daughter and The Wicked Sister

This feature require that you enable JavaScript in your browser.
END_OF_DOCUMENT_TOKEN_TO_BE_REPLACED

This feature require that you enable JavaScript in your browser.
END_OF_DOCUMENT_TOKEN_TO_BE_REPLACED

This feature require that you enable JavaScript in your browser.
END_OF_DOCUMENT_TOKEN_TO_BE_REPLACED