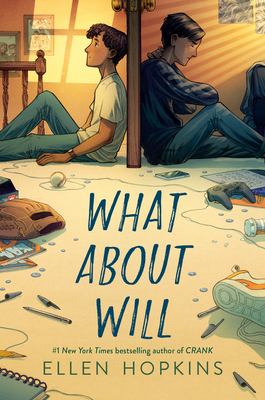 “What about Will’s traumatic brain injury? What about Will’s anger? What about Will coming and going all the time?” These are the questions Trace can’t stop asking himself, even though his parents think Will is on the mend. Trace sees the trouble underneath the surface, and thinks that if he can just fix Will, get his old brother back, that his family will be fixed too. But with Trace asking all these questions about Will, who is keeping track of Trace? What about Will is a homerun, and Trace knows a thing or two about homeruns!

From #1 New York Times bestselling author Ellen Hopkins comes a new heartbreakingly tender middle grade novel-in-verse about the bonds between two brothers and the love they share. Twelve-year-old Trace Reynolds has always looked up to his brother, mostly because Will, who's five years older, has never looked down on him. It was Will who taught Trace to ride a bike, would watch sports on TV with him, and cheer him on at Little League. But when Will was knocked out cold during a football game, resulting in a brain injury--everything changed. Now, seventeen months later, their family is still living under the weight of the incident, that left Will with a facial tic, depression, and an anger he cannot always control, culminating in their parents' divorce. Afraid of further fracturing his family, Trace begins to cover for Will who, struggling with addiction to pain medication, becomes someone Trace doesn't recognize. But when the brother he loves so much becomes more and more withdrawn, and escalates to stealing money and ditching school, Trace realizes some secrets cannot be kept if we ever hope to heal.

Ellen Hopkins is a poet, former journalist, and the award-winning author of twenty nonfiction books for young readers, fourteen bestselling young-adult novels (including The Crank Trilogy, Burned, Impulse, and Tricks series), and four novels for adult readers. This is her second middle-grade novel. Ellen lives with her extended family, two brilliant German shepherds, and a couple of ponds (not pounds) of koi in the eastern shadow of the Northern Nevada Sierra.

END_OF_DOCUMENT_TOKEN_TO_BE_REPLACED

This feature require that you enable JavaScript in your browser.
END_OF_DOCUMENT_TOKEN_TO_BE_REPLACED

This feature require that you enable JavaScript in your browser.
END_OF_DOCUMENT_TOKEN_TO_BE_REPLACED

This feature require that you enable JavaScript in your browser.
END_OF_DOCUMENT_TOKEN_TO_BE_REPLACED