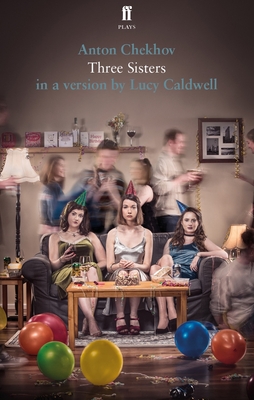 I don't know what it is I'm going to do but I'm going to do something. I'm going to be someone. I am I'm sick of just being me. I'm going to be someone else. Someone better. I'm going to make a difference.
Three sisters, Orla, Marianne and Erin, dream of escaping their tedious suburban lives for a fresh start in America. It is Erin's eighteenth birthday and, as the sun shines and guests assemble, everything for a fleeting moment feels possible.
Relocated from a Russian provincial town in 1900 to East Belfast in the 1990s, Lucy Caldwell's new version of Chekhov's Three Sisters opened at the Lyric Theatre, Belfast in October 2016.

Queens' College, Cambridge and is a graduate of Goldsmith's MA in Creative & Life Writing. She is the author the novels Where They Were Missed (2006) and The Meeting Point (2011), which featured on BBC Radio 4's Book at Bedtime and was awarded the Dylan Thomas Prize. Her stage plays, Leaves, Guardians, and Notes to Future Self, and radio dramas, Girl From Mars, Avenues of Eternal Peace, Witch Week, have won awards including the George Devine Award and the Imison Award. In 2011 she was awarded the Rooney Prize for Irish Literature for her body of work to date.

This feature require that you enable JavaScript in your browser.
END_OF_DOCUMENT_TOKEN_TO_BE_REPLACED

This feature require that you enable JavaScript in your browser.
END_OF_DOCUMENT_TOKEN_TO_BE_REPLACED

This feature require that you enable JavaScript in your browser.
END_OF_DOCUMENT_TOKEN_TO_BE_REPLACED