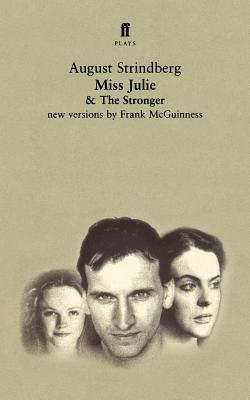 Frank McGuinness presents scintillating new versions of two of August Strindberg's plays -- one a major work, the other less well known. Miss Julie is Strindberg's examination of power, sex, and class, set on a midsummer's eve in a nobleman's house and focusing on the shifting relationship between Miss Julie, the daughter of the house, and Jean, her father's manservant. The Stronger is a short play that explores the complex range of emotions felt by Madame X when she encounters Mademoiselle Y, her husband's former mistress, at a fashionable cafe. Calling Mademoiselle Y worn out and evil, Madame X says that the triumph of her marriage proves she is the stronger of the two -- even though these words ring hollow, as she attempts to deceive only herself.

August Strindberg, the great Swedish dramatist and author, had a profound influence on European drama. His career was particularly marked by a desire to experiment with and redefine theatre. With roots in psychological naturalism, he was nevertheless fascinated by symbols, dreams and fantasies. His later plays anticipated and paved the way for surrealistic, expressionistic and absurdist theatre.

Frank McGuinness is the author of several plays, including Someone Who'll Watch Over Me, as well as many acclaimed translations and adaptations, including Electra and A Doll's House. He teaches at University College, Dublin, and lives in Dublin.

END_OF_DOCUMENT_TOKEN_TO_BE_REPLACED

This feature require that you enable JavaScript in your browser.
END_OF_DOCUMENT_TOKEN_TO_BE_REPLACED

This feature require that you enable JavaScript in your browser.
END_OF_DOCUMENT_TOKEN_TO_BE_REPLACED

This feature require that you enable JavaScript in your browser.
END_OF_DOCUMENT_TOKEN_TO_BE_REPLACED