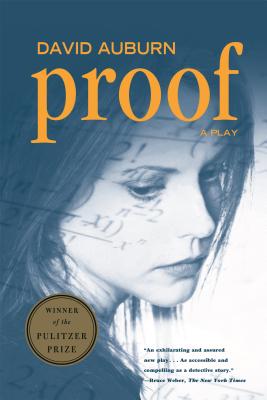 One of the most acclaimed plays of the 1999-2000 season, Proof is a work that explores the unknowability of love as much as it does the mysteries of science.

It focuses on Catherine, a young woman who has spent years caring for her father, Robert, a brilliant mathematician in his youth who was later unable to function without her help. His death has brought into her midst both her sister, Claire, who wants to take Catherine back to New York with her, and Hal, a former student of Catherine's father who hopes to find some hint of Robert's genius among his incoherent scribblings. The passion that Hal feels for math both moves and angers Catherine, who, in her exhaustion, is torn between missing her father and resenting the great sacrifices she made for him. For Catherine has inherited at least a part of her father's brilliance -- and perhaps some of his instability as well. As she and Hal become attracted to each other, they push at the edges of each other's knowledge, considering not only the unpredictability of genius but also the human instinct toward love and trust.

David Auburn is an American playwright whose 2000 play Proof won the Tony Award for Best Play and the Pulitzer Prize for Drama, and was also adapted into a film. He has received the Helen Merrill Playwriting Award and a Guggenheim Fellowship. He lives in Manhattan.

“An exhilarating and assured new play . . . accessible and compelling as a detective story.” —Bruce Weber, The New York Times

“Auburn has taken on some biggies here; what the link may be between genius and mental instability, why it is that lives get stuck, and how elusive the truth can be . . . [Proof's] level of accomplishment and the realness of its characters show that Auburn has both depth and a voice.” —The New Yorker

This feature require that you enable JavaScript in your browser.
END_OF_DOCUMENT_TOKEN_TO_BE_REPLACED

This feature require that you enable JavaScript in your browser.
END_OF_DOCUMENT_TOKEN_TO_BE_REPLACED

This feature require that you enable JavaScript in your browser.
END_OF_DOCUMENT_TOKEN_TO_BE_REPLACED