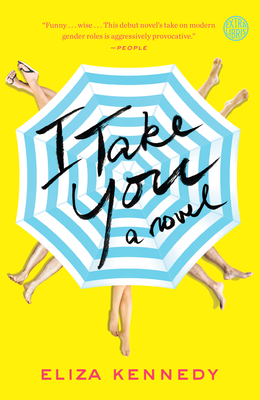 By Eliza Kennedy
$16.00
Email or call for price/availability

Lily Wilder is a lawyer, a workaholic, and the last person on Earth that should be getting married. Her moral compass is spotty at best and her fiancé, Will, is way out of her league. One week before the wedding she’s having second thoughts and her parents aren’t convinced wedded bliss is for her. To make matters worse, she is being blackmailed by her soon-to- be mother-in-law, and the biggest case in her short career is looming over her head. This hysterical tale of pre-wedding blunders, missteps, and love is sure to have you in stitches. Eliza Kennedy’s I Take You puts a new spin on cold-feet that you won’t be able to put down!

This feature require that you enable JavaScript in your browser.
END_OF_DOCUMENT_TOKEN_TO_BE_REPLACED

This feature require that you enable JavaScript in your browser.
END_OF_DOCUMENT_TOKEN_TO_BE_REPLACED

This feature require that you enable JavaScript in your browser.
END_OF_DOCUMENT_TOKEN_TO_BE_REPLACED