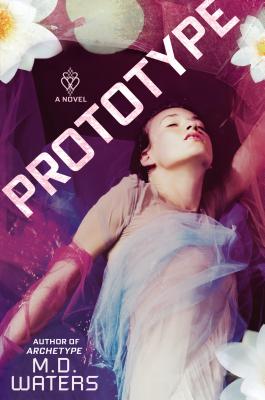 This stunning sequel to Archetype will have you on the edge of your seat. Emma is on the run and Declan is pulling out all the stops to find her. When her cover is blown, she goes back to the Resistance and finds Noah with another woman. It is now up to Emma to figure out her future, be a mother to Adrienne, and sort out her feelings for Noah. M.D. Waters’ Prototype delivers the perfect ending to Emma’s saga.

The stunning debut that began with Archetype and has readers buzzing concludes in Prototype, when a woman's dual pasts lock onto a collision course, threatening her present and future.
Emma looks forward to the day when she can let go of her past both of them. After more than a year on the run, with clues to her parents whereabouts within her grasp, she may finally find a place to settle down. Start a new life. Maybe even create new memories with a new family.
But the past rises to haunt her and to make sure there's nowhere on the planet she can hide. Declan Burke wants his wife back, and with a little manipulation and a lot of reward money, he's got the entire world on his side. Except for the one man she dreads confronting the most: Noah Tucker.
Emma returns to face what she's done but finds that the past isn t the problem. It's the present and the future it represents. Noah has moved on and another woman is raising their daughter.
In the shocking conclusion to M.D. Waters's spectacular debut, Emma battles for her life and her freedom, tearing down walls and ripping off masks to reveal the truth. She's decided to play their game and prove she isn t the woman they thought she was. Even if it means she winds up dead. Or worse, reborn.

M.D. WATERS is the author of Archetype. She lives in Maryland.

“Waters follows her stunning debut Archetype with this concluding thriller… Readers who adored the first book will definitely want to see how the story plays out.” - Library Journal

PRAISE FOR M.D. WATERS AND ARCHETYPE

“[Archetype] is a high-concept, high-adventure, steamy love story with plenty of action and violence. I am still dreaming about the characters, which makes me very happy to have learned that the author’s second book will be coming out in July 2014. I will absolutely be the first person in line for it.”
—Jackie Blem, Tattered Cover Book Store, Denver, Colorado

“This is one of those unforgettable, breathless books you want all your friends to read.”
—Kym Havens, Wellesley Books, Wellesley, Massachusetts

“M.D. Waters has given us that rare and wonderful action heroine who possesses both nerve and emotional depth. That rich characterization combined with an intricately crafted sci-fi mystery made Archetype an enthralling debut that I couldn’t put down.” —Richelle Mead, #1 New York Times bestselling author

“[A] dazzling debut. . . .This is one of those books that seeps into your consciousness. It forces one to ponder the possible ‘what if?’”
—Krys Tourtois, Schuler Books & Music, Lansing, Michigan

“A mystifying tale that tiptoes up and grabs you by the throat. . . .With writing that is supremely confident, Waters builds the tension slowly, and Emma’s doubts and secrets multiply until the haunting explosion of the truth.”
—Susan Wasson, Bookworks, Albuquerque, New Mexico

END_OF_DOCUMENT_TOKEN_TO_BE_REPLACED

This feature require that you enable JavaScript in your browser.
END_OF_DOCUMENT_TOKEN_TO_BE_REPLACED

This feature require that you enable JavaScript in your browser.
END_OF_DOCUMENT_TOKEN_TO_BE_REPLACED

This feature require that you enable JavaScript in your browser.
END_OF_DOCUMENT_TOKEN_TO_BE_REPLACED