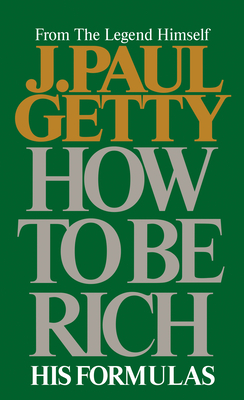 Learn J. Paul Getty’s secrets on making money and getting rich in this “excellent How To book from a $$$ and sense man” (Kirkus Reviews).

There are plenty of books on making money by men who haven't made much. But if J. Paul Getty, who Fortune magazine called “the richest man in the world,” doesn't know how, who does? Here the billionaire businessman discloses the secrets of his success—and provides a blueprint for those who want to follow in his footsteps. And he goes beyond the matter of making money to the question of what to do with it.

“Getty says it: ‘You can be rich.’”—New York Herald Tribune

Jean Paul Getty was an American industrialist and founder of the Getty Oil Company. In 1957 Fortune magazine named him the richest living American, and the 1966 Guinness Book of Records named him the world’s richest private citizen, worth nearly 9 billion dollars in today’s money. He was the author of several books, including the bestselling How to Be Rich, and his autobiography, As I See It. He died in 1976.

This feature require that you enable JavaScript in your browser.
END_OF_DOCUMENT_TOKEN_TO_BE_REPLACED

This feature require that you enable JavaScript in your browser.
END_OF_DOCUMENT_TOKEN_TO_BE_REPLACED

This feature require that you enable JavaScript in your browser.
END_OF_DOCUMENT_TOKEN_TO_BE_REPLACED