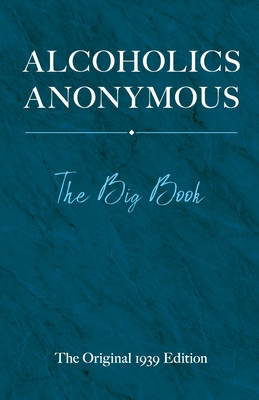 Many thousands have benefited from "The Big Book" and its simple but profound explanation of the doctrines behind Alcoholics Anonymous, which was founded in 1935 by Bill Wilson and Dr. Bob Smith. This original 1939 edition outlines the famous 12 steps, and offers counsel for those who wish to join the program but doubt the existence of a higher power. It also contains encouraging personal stories, in which AA members relate their experiences with alcohol and how they found the path to sobriety.
"The Big Book" has gone through numerous editions and remains the most widely used resource for recovering alcoholics. Only this original 1939 edition includes all 29 stories of the program's pioneers, which share the details of their full journey, including initial recovery, sometimes followed by relapse and eventual success. This edition also features the key to the solution claimed by Bill Wilson: a vital spiritual experience that allows followers to rediscover, or discover, God.
This realistic portrayal of the program as offered by its founders has been lost in subsequent editions of the work, and is presented here to serve as a reminder that success comes in many forms.

A chance meeting in 1935 between two alcoholics -- Bill Wilson, a New York stockbroker, and Bob Smith, a surgeon based in Akron, Ohio -- led to the organization of Alcoholics Anonymous. The pair developed the 12-step program and began working with other alcoholics, helping them achieve sobriety one day at a time. In 1939 they published "The Big Book," one of the bestselling books of all time and a lifeline to millions worldwide.

This feature require that you enable JavaScript in your browser.
END_OF_DOCUMENT_TOKEN_TO_BE_REPLACED

This feature require that you enable JavaScript in your browser.
END_OF_DOCUMENT_TOKEN_TO_BE_REPLACED

This feature require that you enable JavaScript in your browser.
END_OF_DOCUMENT_TOKEN_TO_BE_REPLACED