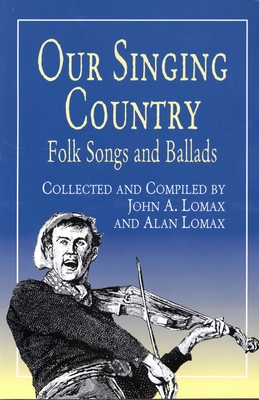 In the 1930s and 40s, a father-and-son team of folklorists hit the highways, byways and rural routes of the United States, traveling in a battered pickup truck laden with primitive recording equipment. John A. Lomax and his son, Alan, covered thousands of miles, stopping off at tarpaper shacks, juke joints, prison yards, and other out-of-the-way places to listen to native singers and to record them for the Library of Congress archives. The Lomaxes made over 10,000 field recordings, and from this vast collection they compiled a hugely successful series of anthologies, beginning with the widely acclaimed American Ballads and Folk Songs in 1934. That collection was followed by the present volume in 1941.
Here are the music and words to some 200 songs recorded at the state penitentiary in Milledgeville, Georgia, in Michigan lumber camps, Louisiana rice fields, on Western cattle trails, and in many other locales around the nation. A beguiling mix of the familiar and the rare, the tunes range from spirituals and other songs of faith to chain-gang work chants and field hollers, as well as game songs, lullabies, courting songs, Cajun airs, breakdowns, and many more. Well-known standards such as "Hush Li'l' Baby," "Old Blue," "John Henry," and "Jack o' Diamonds" appear alongside less-familiar tunes, including "The Lady Who Loved a Swine," "You Kicked and Stomped and Beat Me," and the miners' lament, "Oh, My Liver and My Lungs."
This new edition features an informative introduction by award-winning author Judith Tick, a faculty member at Northeastern University. Notes on tune origins, two indexes, and an extensive bibliography round out this important archive of authentic folk songs and ballads.

END_OF_DOCUMENT_TOKEN_TO_BE_REPLACED

This feature require that you enable JavaScript in your browser.
END_OF_DOCUMENT_TOKEN_TO_BE_REPLACED

This feature require that you enable JavaScript in your browser.
END_OF_DOCUMENT_TOKEN_TO_BE_REPLACED

This feature require that you enable JavaScript in your browser.
END_OF_DOCUMENT_TOKEN_TO_BE_REPLACED