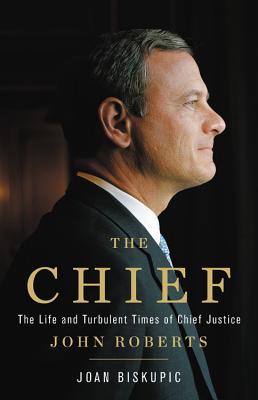 By Joan Biskupic
$32.00
Email or call for price/availability

An incisive biography of the Supreme Court's enigmatic Chief Justice, taking us inside the momentous legal decisions of his tenure so far.
John Roberts was named to the Supreme Court in 2005 claiming he would act as a neutral umpire in deciding cases. His critics argue he has been anything but, pointing to his conservative victories on voting rights and campaign finance. Yet he broke from orthodoxy in his decision to preserve Obamacare. How are we to understand the motives of the most powerful judge in the land?
In The Chief, award-winning journalist Joan Biskupic contends that Roberts is torn between two, often divergent, priorities: to carry out a conservative agenda, and to protect the Court's image and his place in history. Biskupic shows how Roberts's dual commitments have fostered distrust among his colleagues, with major consequences for the law. Trenchant and authoritative, The Chief reveals the making of a justice and the drama on this nation's highest court.

Joan Biskupic is a legal analyst at CNN. Previously, she served as an editor-in-charge for legal affairs at Reuters and as the Supreme Court correspondent for The Washington Post. A Pulitzer Prize finalist and author of books on Sandra Day O'Connor, Antonin Scalia, and Sonia Sotomayor, Biskupic lives in Washington, DC.

"The Chief offers an extraordinarily insightful, thoughtful and accessible analysis of Roberts's personal life, professional career, judicial experience and approach to constitutional interpretation. It is essential reading for anyone who truly wants to understand this pivotal moment in Supreme Court history."—Washington Post

"Assiduously reported and briskly written...[Biskupic]
suggests that [Roberts] is pulled by two often-conflicting instincts. One is
ideological: a desire to move the court rightward on race, religion and other
issues. The other is institutional: an interest in the court being respected
and seen as nonpolitical."—New York Times Book Review

"An approachable volume about subjects often unapproachable. Biskupic, who has covered the Supreme Court for a quarter century, captures the tensions within the group, the interplay among the justices, and the pressures brought to bear on them by outsiders...The Chief is an ample and amiable companion to such insider accounts as The Brethren, the classic 1979 book by Bob Woodward and Scott Armstrong, and The Nine, the influential 2007 book by Jeffrey Toobin."—Boston Globe

"A well-reported book, it sheds new light...As our attention spans dwindle to each frantic day's
headlines, we can forget that the position of chief justice is one of long-term
consequence."—Atlantic

"As Joan Biskupic's invaluable biography shows, Roberts is
at once a committed Republican with very conservative policy preferences and
ties to the conservative community, and an institutionalist who cares deeply
about the nonpartisan character of the Court."—New York Review of Books

"Biskupic takes readers behind the scenes, revealing for the
first time how Roberts swung back and forth in his deliberations before
shocking everyone with his conclusion, preserving Obamacare on the slimmest of
threads...Among [her] most valuable insights is how hard Roberts strives to be
seen as apolitical when, in fact, he is not only savvy about politics but also
is leading a body that is, inevitably, political."—Christian Science Monitor

"Ms. Biskupic is a skillful writer and a diligent scholar,
and the John Roberts she presents here is a sympathetic and complex character."—Wall Street Journal

"[Biskupic] makes painfully clear that the defining feature
of Roberts's legal career has been his relentless efforts to roll back any
measures to combat racial inequality...Biskupic is unfailingly evenhanded, but
what she describes is a calculated, sustained assault on the nation's civil
rights laws by the most powerful judge in the country"—Washington Monthly

"Justice Roberts's desire to avoid politics while perhaps being unable to do so-is a key theme of Joan Biskupic's new biography...The Chief is unfailingly informative and engaging."—National Review

"For readers interested in understanding what makes John Roberts tick-as a devoted husband and father as well as a chief justice-The Chief is a solid work of legal journalism that rewards those willing to read carefully."—Philadelphia Inquirer

"Biskupic makes a compelling case that the past is prologue
when interpreting the jurisprudence of Chief Justice John Roberts."—Maryland Daily Record

"Compelling."—"[Biskupic] evaluates Roberts' tenure via the court's mostdisputed cases involving race, voting rights, reproductive rights, and LGBTQrights...An unprecedented glimpse at the interpersonal, and often contentious,relationships that reverberate throughout the court."

"In-depth...Biskupic's analysis will be closely read by Court
watchers on both the Right and Left."—Publishers Weekly

"Well researched, well written, and readable...Strongly
recommended for all institutions of higher education."—Choice

"This fascinating book is an act of public service: with deep insight and experience, with clarity and sensitivity, Joan Biskupic illuminates the life and mind of a man who wields, in his quiet but determined way, immense power. Biskupic portrays a Chief Justice increasingly at odds with himself-a man deeply devoted to the Court as an impartial institution, but deeply committed to the conservative project of rolling back the rights revolution of previous generations. The Chief is essential reading as John Roberts leads the Court, and with it the nation, through one of the most consequential and contentious eras in its history."—Jeff Shesol, author of Supreme Power: FranklinRoosevelt vs. The Supreme Court

"Joan Biskupic, with clear writing and a deep understanding of her subject, serves as an invaluable guide into the style and substance of Chief Justice John Roberts and his uneven leadership of a polarized and right-leaning Supreme Court. The Chief is a revelation that comes at just the right time."—David Maraniss, Pulitzer Prize-winning biographer

"Joan Biskupic draws on meticulous reporting and deep
knowledge of the Supreme Court to bring us a fascinating real-time portrait of
Chief Justice John Roberts, one of the country's most powerful but least known
individuals, a man now in a unique position to shape the law in the age of
Trump."—Linda Greenhouse, lecturer at Yale Law School andformer New York Times Supreme Court correspondent

"Joan Biskupic has written the definitive account of the
consummate lawyer and deft politician at the helm of our nation's judiciary.
Avoiding legal jargon while steering clear of slogans and stereotypes, Biskupic
paints a highly readable and deeply informative three-dimensional portrait of
the man whom fate has placed front and center in an unfolding drama bound to
shape American life for decades to come."—Laurence Tribe, Professor of Constitutional Law,Harvard University

"Delving into the mystery of the Supreme Court and its Chief Justice, Joan Biskupic-perhaps the best Supreme Court reporter in the country-offers a rare and incisive look at the most powerful judge in America. At this crucial time for the Court and country, The Chief offers the first-ever, in-depth look at this important, enigmatic man, exploring the chasm between reputation and reality and bringing us behind the scenes to see how a jurist who seems so steady and in charge often struggles to win his colleagues' confidence and trust."—Jake Tapper, host of The Lead with Jake Tapper onCNN

This feature require that you enable JavaScript in your browser.
END_OF_DOCUMENT_TOKEN_TO_BE_REPLACED

This feature require that you enable JavaScript in your browser.
END_OF_DOCUMENT_TOKEN_TO_BE_REPLACED

This feature require that you enable JavaScript in your browser.
END_OF_DOCUMENT_TOKEN_TO_BE_REPLACED