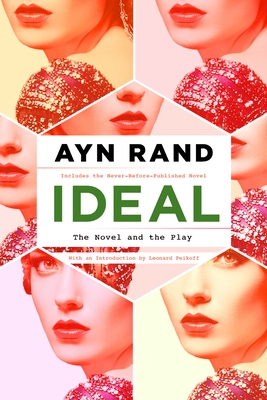 In print for the first time ever, author and philosopher Ayn Rand’s novel Ideal.

Originally conceived as a novel but then transformed into a play by Ayn Rand, Ideal is the story of beautiful but tormented actress Kay Gonda. Accused of murder, she is on the run, and she turns for help to six fans who have written letters to her, each telling her that she represents their ideal—a respectable family man, a far-left activist, a cynical artist, an evangelist, a playboy, and a lost soul. Each reacts to her plight in his own way, their reactions a glimpse into their secret selves and their true values. In the end their responses to her pleas give Kay the answers she has been seeking.

Ideal was written in 1934 as a novel, but Ayn Rand thought the theme of the piece would be better realized as a play and put the novel aside. Now, both versions of Ideal are available for the first time ever to the millions of Ayn Rand fans around the world, giving them a unique opportunity to explore the creative process of Rand as she wrote first a book, then a play, and the differences between the two.

WITH AN INTRODUCTION BY LEONARD PEIKOFF

Born February 2, 1905, Ayn Rand published her first novel, We the Living, in 1936. Anthem followed in 1938. It was with the publication of The Fountainhead (1943) and Atlas Shrugged (1957) that she achieved her spectacular success. Rand’s unique philosophy, Objectivism, has gained a worldwide audience. The fundamentals of her philosophy are put forth in three nonfiction books, Introduction to Objectivist Epistemology, The Virtues of Selfishness, and Capitalism: The Unknown Ideal. They are all available in Signet editions, as is the magnificent statement of her artistic credo, The Romantic Manifesto.

This feature require that you enable JavaScript in your browser.
END_OF_DOCUMENT_TOKEN_TO_BE_REPLACED

This feature require that you enable JavaScript in your browser.
END_OF_DOCUMENT_TOKEN_TO_BE_REPLACED

This feature require that you enable JavaScript in your browser.
END_OF_DOCUMENT_TOKEN_TO_BE_REPLACED