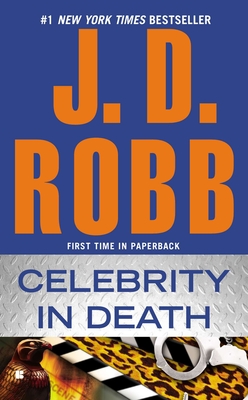 This is book number 34 in the In Death series.

In this thriller in the #1 New York Times bestselling In Death series, Lieutenant Eve Dallas must solve the murder of an actress whose final role was to die for...

Lieutenant Eve Dallas is no party girl, but she’s managing to have a reasonably good time at the celebrity-packed bash celebrating The Icove Agenda, a film based on one of her famous cases. It’s a little spooky seeing the actress playing her, who looks as though she could be her long-lost twin. Not as unsettling, though, as seeing the actress who plays Peabody—drowned in the lap pool on the roof of the director’s luxury building.

Talented but rude and widely disliked, K.T. Harris made an embarrassing scene during dinner. Now she’s at the center of a crime scene—and Eve is more than ready to get out of her high heels and strap on her holster to step into the role she was born to play: cop.

“Superstar Robb takes Eve and co. on a through-the-looking-glass ride as they meet their actor counterparts in the movie based on one of Eve’s most famous cases. The juxtaposition is amusing and deadly, as murder strikes at a swanky party. One of this series’ best elements is the gradual development of characters punctuated with unexpected payoffs. Great good fun as always!.”—RT Book Reviews

This feature require that you enable JavaScript in your browser.
END_OF_DOCUMENT_TOKEN_TO_BE_REPLACED

This feature require that you enable JavaScript in your browser.
END_OF_DOCUMENT_TOKEN_TO_BE_REPLACED

This feature require that you enable JavaScript in your browser.
END_OF_DOCUMENT_TOKEN_TO_BE_REPLACED