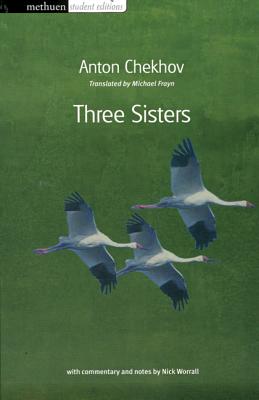 You'd be hard put to find a better script to work with than this translation by Michael Frayn . . . It sticks rigorously to the inner thrust of the play while giving it a fresh, crisp clarity that makes it not just accessible but compelling to watch. The underlying tragedy . . . is intact. It is made more moving, not less, by the way Frayn's ineffably light touch has caught too the comedy of Andrey and his three sisters.' GUARDIAN

'Frayn puts well the central statement of this most moving of dramas: it is about the irony of the hopes by which people live and the way their destiny mocks them. Chekhov shows how life is both nourished and poisoned by the act of hope itself' DAILY TELEGRAPH Following their father's death, life for sisters Olga, Masha and Irina in a Russian provincial garrison town has become unbearably dull. They feel they have become culturally, romantically and intellectually starved. To these sisters, Moscow, where they once lived and in spite of its sad memories, has become a symbol of unfulfilled hope, promises and opportunity, and one which contrasts with the tedium of their own lives and circumstances. The sisters' main hope of moving to Moscow depends on their brother, Andrey, with his ambitions to work in academia in Moscow. Set over three and a half years at the turn of the twentieth century, and premiered at the Moscow Art Theatre in 1901, Chekhov's play has become among the most iconic in modern theatre. This translation is by Michael Frayn, one of today's most eminent British playwrights and translators of Russian drama. Commentary and notes by Nick Worrall.

Anton Chekhov (1860-1904) was one of the most prominent Russian writers of the nineteenth and early twentieth century. Initially writing to support his income as a physician, he gained widespread acclaim as a short story writer and playwright and his work has had a profound influence on modern drama. His plays include Ivanov, The Seagull, Uncle Vanya, Three Sisters and The Cherry Orchard. Michael Frayn is an award-winning British playwright, novelist and translator. His translations of Chekhov's plays have been acclaimed and widely performed.

“We value [Chekhov] for his juxtaposition of comedy and emotional pain, his penetration into character and his understanding of the eternal truths of human nature.”—Telegraph

This feature require that you enable JavaScript in your browser.
END_OF_DOCUMENT_TOKEN_TO_BE_REPLACED

This feature require that you enable JavaScript in your browser.
END_OF_DOCUMENT_TOKEN_TO_BE_REPLACED

This feature require that you enable JavaScript in your browser.
END_OF_DOCUMENT_TOKEN_TO_BE_REPLACED