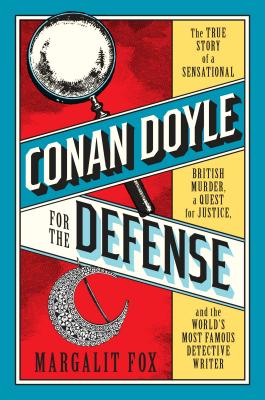 By Margalit Fox
Email or call for price.
Hard to Find

Glasgow, 1908: A wealthy elderly woman is brutally murdered. The police ignore a wealthy, well-connected suspect to charge a convenient one – Oscar Slater, a German Jewish cardsharp. A transatlantic manhunt ensues, followed by prosecutorial and judicial misconduct, a conviction, and a death sentence. Slater persuades an inmate being released to sneak out a tiny note (hidden between the man’s denture and his gum) begging Sir Arthur Conan Doyle to help overturn the conviction. Conan Doyle does, using techniques he created for his fictional detective Sherlock Holmes, and succeeds. Sounds like wild historical fiction, but it’s all true! Fox, an award-winning New York Times journalist and meticulous researcher, weaves the threads of class, forensic science, perjury, anti-Semitism, and tender familial love into a cord that pulls the reader in more tightly with every turn of the page.

“A wonderfully vivid portrait of the man behind Sherlock Holmes . . . Like all the best historical true crime books, it’s about so much more than crime.”—Tana French, author of In the Woods

After a wealthy woman was brutally murdered in her Glasgow home in 1908, the police found a convenient suspect in Oscar Slater, an immigrant Jewish cardsharp. Though he was known to be innocent, Slater was tried, convicted, and consigned to life at hard labor. Outraged by this injustice, Arthur Conan Doyle, already world renowned as the creator of Sherlock Holmes, used the methods of his most famous character to reinvestigate the case, ultimately winning Slater’s freedom.

With “an eye for the telling detail, a forensic sense of evidence and a relish for research” (The Wall Street Journal), Margalit Fox immerses readers in the science of Edwardian crime detection and illuminates a watershed moment in its history, when reflexive prejudice began to be replaced by reason and the scientific method.

Praise for Conan Doyle for the Defense

“Artful and compelling . . . [Fox’s] narrative momentum never flags. . . . Conan Doyle for the Defense will captivate almost any reader while being pure catnip for the devotee of true-crime writing.”—The Washington Post

“Developed with brio . . . [Fox] is excellent in linking the 19th-century creation of policing and detection with the development of both detective fiction and the science of forensics—ballistics, fingerprints, toxicology and serology—as well as the quasi science of ‘criminal anthropology.’”—The New York Times Book Review

“[Fox] has an eye for the telling detail, a forensic sense of evidence and a relish for research.”—The Wall Street Journal

“Gripping . . . The book works on two levels, much like a good Holmes case. First, it is a fluid story of a crime. . . . Second, and more pertinently, it is a deeper story of how prejudice against a class of people, the covering up of sloppy police work and a poisonous political atmosphere can doom an innocent. We should all heed Holmes’s salutary lesson: rationally follow the facts to find the truth.”—Time

A retired senior writer at The New York Times, Margalit Fox is considered one the foremost explanatory writers and literary stylists in American journalism. As a longtime member of the newspaper’s celebrated Obituary News Department, she has written the front-page public sendoffs of some of the leading cultural figures of our age. (Conan Doyle for the Defense is in many ways a fond belated obituary—for the long-overlooked Oscar Slater, an immigrant Everyman treated inexcusably by history.) Fox’s previous book, The Riddle of the Labyrinth, won the William Saroyan Prize for International Writing. She lives in Manhattan with her husband, the writer and critic George Robinson.

“Gripping . . . The book works on two levels, much like a good Holmes case. First, it is a fluid story of a crime. . . . Second, and more pertinently, it is a deeper story of how prejudice against a class of people, the covering up of sloppy police work and a poisonous political atmosphere can doom an innocent. We should all heed Holmes’s salutary lesson: rationally follow the facts to find the truth.”—Time

“Splendid . . . The ingredients are too good to pass up: a famous detective novelist actually playing detective, a man serving time for a murder he did not commit, and a criminal justice system slowly, and reluctantly, reckoning with the advent of forensic science.”—Sarah Weinman, The New Republic

“Expertly constructed, this work will appeal to Conan Doyle fans and is ideal for all true crime collections.”—Library Journal (starred review)

“[Margalit] Fox . . . does her own detective work in unpicking the opposing personalities and careers of her protagonists. . . . Like a good murder mystery, Conan Doyle for the Defense is a fast-paced read that twists and turns with the panache of a Holmes short story.”—The Times

“Fox shows the new system of forensic science, as typified by Doyle’s great creation Sherlock Holmes. . . . She wants us to see that the racialisation of crime is nothing new: bad science and economic insecurity have long been responsible for creating ‘out groups’ on whom we dump our worst terrors.”—The Guardian

“Fox expertly frames the case of Oscar Slater as another example of scapegoating. . . . If you are a Holmes devotee, you will love watching his creator take apart a flimsy criminal case through reason and meticulous examination of the evidence.”—The Seattle Times

“Fox’s engrossing book brings his case back to vivid life and highlights the part played in it by the creator of the world’s most famous detective.”—The Daily Mail

“Absorbing . . . Fox demonstrates her eye for the telling detail and her innate sense of pacing and suspense. . . . At a time when bias can and does still land innocents in jail, the relevance of the Slater case remains all too clear.”—The Jewish Week

END_OF_DOCUMENT_TOKEN_TO_BE_REPLACED

This feature require that you enable JavaScript in your browser.
END_OF_DOCUMENT_TOKEN_TO_BE_REPLACED

This feature require that you enable JavaScript in your browser.
END_OF_DOCUMENT_TOKEN_TO_BE_REPLACED

This feature require that you enable JavaScript in your browser.
END_OF_DOCUMENT_TOKEN_TO_BE_REPLACED