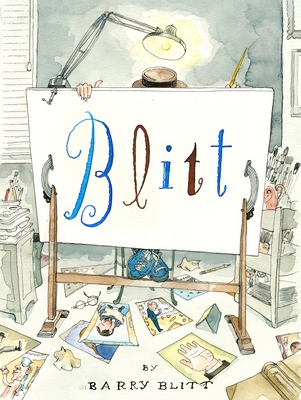 "One of the great political cartoonists of our time." —David Remnick

A gorgeous, hilarious, and provocative compendium of the Pulitzer Prize-winning artist’s illustrations for The New Yorker, The New York Times, Vanity Fair, and more.

Barry Blitt’s cartoons have been lampooning American politics and culture for decades. His iconic New Yorker covers are defining images for our times, earning him adoration from critics and fans and piles of hate mail from everyone else.

This lavish full-color collection showcases more than a quarter century of Blitt’s work: his wry and provocative New Yorker covers, from the Obama fist bump heard round the world, to George W. Bush’s drowning cabinet, to the myriad (and counting) misadventures of Donald Trump; Blitt’s long-running collaboration with Frank Rich on The New York Times op-ed page; and his work for Vanity Fair, Time, Entertainment Weekly, and others. Blitt also shares his private sketchbooks, drafts, and uproarious rejected illustrations, offering readers an illuminating view into his creative process.

Featuring the author's hand-scrawled annotations and self-deprecating witticisms, more than one hundred never-before-seen sketches and drafts, and essays from Blitt’s collaborators and peers, including Frank Rich, Françoise Mouly, and Steve Brodner, Blitt is a visual delight and a rollicking trip into the mind of an utterly original artist.

Barry Blitt is a Pulitzer Prize-winning cartoonist and illustrator. Since 1992, he has contributed illustrations and more than one hundred covers to The New Yorker, including “Deluged,” voted Cover of the Year by the American Society of Magazine Editors in 2006, and “The Politics of Fear,” a finalist for the same award in 2009. Blitt’s work has also appeared in Vanity Fair, Time, Rolling Stone, The Atlantic, and The New York Times. His work for children includes The 39 Apartments of Ludwig van Beethoven and Once Upon a Time, the End (Asleep in 60 Seconds). Blitt lives in Roxbury, Connecticut.

“For nearly a generation now, Barry Blitt has been the sharpest and funniest political artist in the United States.” —David Remnick

“Blitt’s wry images twist stereotypes and tweak the zeitgeist. They jump from magazine covers headed for the recycling pile to become icons of satire that are welded to our collective memory and to the historical record.” —Matt Wuerker, Politico

“By turns fascinating and entertaining... Seeing how this artist turns his ideas into a finished product is one of the most captivating aspects... the beauty of his art is that it rarely needs explaining. You just get it.” —Mother Jones

“Don’t be fooled by the whimsical hand drawn serif of the cover: this work bites. As with the best satirists and commentators, Blitt’s work packs the punch, as demonstrated in these works that straddle more than 25 years.” —AIGA Eye on Design

“Indelible images from one of America's leading political cartoonists. . . . A treasure trove for fans of the New Yorker, political satire, and graphic design.” —Kirkus (starred review)

“There can be no disputing that Blitt has earned a vaulted place in the pantheon of twenty-first-century political satirists.” —Steven Heller

END_OF_DOCUMENT_TOKEN_TO_BE_REPLACED

This feature require that you enable JavaScript in your browser.
END_OF_DOCUMENT_TOKEN_TO_BE_REPLACED

This feature require that you enable JavaScript in your browser.
END_OF_DOCUMENT_TOKEN_TO_BE_REPLACED

This feature require that you enable JavaScript in your browser.
END_OF_DOCUMENT_TOKEN_TO_BE_REPLACED