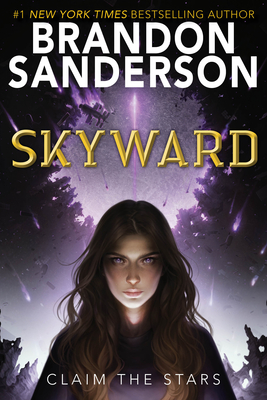 This is book number 1 in the Skyward series.

After successfully conquering the genre of fantasy, Brandon Sanderson has now set his sights and imagination on science fiction. Skyward follows Spensa and her quest to become a Pilot, the highest honor that any citizen of Alta can hold, as they are the defenders of this small society from an alien race called the Krell. Spensa fights to bring honor back to her family’s name, after her father’s unforgettable betrayal of Alta, and must prove that his cowardice was not inherited. This novel shows how powerful hope can be when humanity is on its last leg, and leaves you gripping your seat through every Starship battle for their home. Intense and hilarious, you’ll feel the G-forces with every takeoff as you soar through the world that Sanderson has created.

From Brandon Sanderson, the #1 New York Times bestselling author of the Reckoners series, Words of Radiance, and the internationally bestselling Mistborn series, comes the first book in an epic new series about a girl who dreams of becoming a pilot in a dangerous world at war for humanity's future.

Spensa's world has been under attack for decades. Now pilots are the heroes of what's left of the human race, and becoming one has always been Spensa's dream. Since she was a little girl, she has imagined soaring skyward and proving her bravery. But her fate is intertwined with her father's--a pilot himself who was killed years ago when he abruptly deserted his team, leaving Spensa's chances of attending flight school at slim to none.

No one will let Spensa forget what her father did, yet fate works in mysterious ways. Flight school might be a long shot, but she is determined to fly. And an accidental discovery in a long-forgotten cavern might just provide her with a way to claim the stars.

Praise for Skyward:
A Kirkus Reviews Best Book of the Year

"Startling revelations and stakes-raising implications...Sanderson plainly had a ball with this nonstop, highflying opener, and readers will too."--Kirkus Reviews, Starred Review

"With this action-packed trilogy opener, Sanderson offers up a resourceful, fearless heroine and a memorable cast...[and] as the pulse-pounding story intensifies and reveals its secrets, a cliffhanger ending sets things up for the next installment."--Publishers Weekly, Starred Review

"It is impossible to turn the pages fast enough."--Booklist

"Sanderson delivers a cinematic adventure that explores the defining aspects of the individual versus the society...[and] fans of [his] will not be disappointed."--SLJ

"Another win for Sanderson . . . he's simply a brilliant writer. Period."--Patrick Rothfuss, author of the New York Times and USA Today bestseller The Name of the Wind

"Compelling. . . . Sanderson uses plot twists that he teases enough for readers to pick up on to distract from the more dramatic reveals he has in store."--AV Club

Brandon Sanderson is the author of the #1 New York Times bestselling Reckoners series: Steelheart, Firefight, and Calamity and the e-original Mitosis; the internationally bestselling Mistborn trilogy; and he was chosen to complete Robert Jordan's The Wheel of Time series. His books have been published in more than twenty-five languages and have sold millions of copies worldwide. Brandon lives and writes in Utah. To learn more about him and his books, visit him at brandonsanderson.com or follow @BrandSanderson on Twitter and Instagram.

"Reading this book is like standing inside a video game: all action and movement. Sanderson’s aerial dogfights are so masterful."—Booklist

"Another win for Sanderson . . . he's simply a brilliant writer. Period."—Patrick Rothfuss, author of the New York Times and USA Today bestseller The Name of the Wind

"Compelling. . . . Sanderson uses plot twists that he teases enough for readers to pick up on to distract from the more dramatic reveals he has in store."—AV Club

END_OF_DOCUMENT_TOKEN_TO_BE_REPLACED

This feature require that you enable JavaScript in your browser.
END_OF_DOCUMENT_TOKEN_TO_BE_REPLACED

This feature require that you enable JavaScript in your browser.
END_OF_DOCUMENT_TOKEN_TO_BE_REPLACED

This feature require that you enable JavaScript in your browser.
END_OF_DOCUMENT_TOKEN_TO_BE_REPLACED