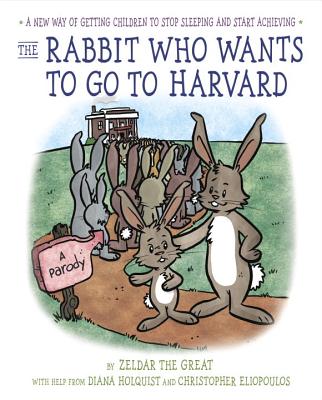 For fans of Goodnight iPad and Go the F**k to Sleep, this hilarious picture-book parody satirizes helicopter parents and our culture's extreme focus on childhood achievement. It's an irresistible gift for moms and dads with a sense of humor
Are you concerned that your four-year-old is not taking Pre-K seriously? Is your child napping when he could instead be cramming for his SAT? Have you heard about the new hypnotize-your-kid-to-sleep book and thought, SLACKER? Join parents all over the world who have embraced this groundbreaking book as their new nightly routine.
In this uproariously funny parody, Ronald and Mommy Rabbit get help from Adderall Aardvark, Kollege Koach Kitty, and Admission Officer Owl, who know just how to help children stop their incessant sleeping and other quaint relics of youth for a much worthier goal: the Ivy League.
Makeyourdreams yourchild's dreams today
Any truly successful parent knows that there's no time to rest: the prep school toddler down the street has already invented a new computer language This book is guaranteed to get your kids on the right track. Now. Harvard Dad, class of 2031
Makes controlling your kid child's play or, you know, the opposite Harvard Mom, class of 2032
Super creepy Mom in Seattle

Diana Holquist is the author of the parenting memoirBattle Hymn of the Tiger Daughter, as well as several romance novels, including those published as Sophie Gunn. A graduate of Columbia University and former advertising copywriter, she lives near Philadelphia, Pennsylvania with her husband, two teenagers, and three cats. Christopher Eliopoulos began his illustration career as a letterer for Marvel, and has worked on thousands of comics. He is also the illustrator of theNew York Timesbestselling Ordinary People Change the World series by Brad Meltzer. He lives in New Jersey with his wife and their identical twin sons."

This feature require that you enable JavaScript in your browser.
END_OF_DOCUMENT_TOKEN_TO_BE_REPLACED

This feature require that you enable JavaScript in your browser.
END_OF_DOCUMENT_TOKEN_TO_BE_REPLACED

This feature require that you enable JavaScript in your browser.
END_OF_DOCUMENT_TOKEN_TO_BE_REPLACED