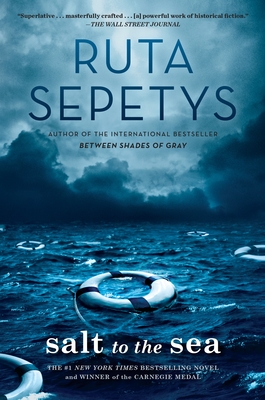 Everyone keeps dangerous secrets but these secrets are even more dangerous during wartime. Four teens – Florian, Joana, Emilia, and Alfred – are surviving WWII but just barely. Their secrets are threatening to surface and cause great trouble. Through a twist of fate and luck, the four find themselves on a ship that could mean their freedom, if their pasts don’t catch up to them first. Ruta Sepetys mixes romance, history, and suspense in such a way that you won’t be able to put the book down. Salt to the Sea is this year’s must read!

For readers of Between Shades of Gray and All the Light We Cannot See, Ruta Sepetys returns to WWII in this epic novel that shines a light on one of the war's most devastating—yet unknown—tragedies.

Praise for Salt to the Sea:
Featured on NPR's Morning Edition  ♦  "Superlative...masterfully crafted...[a] powerful work of historical fiction."—The Wall Street Journal  ♦  "[Sepetys is] a master of YA fiction…she once again anchors a panoramic view of epic tragedy in perspectives that feel deeply textured and immediate."—Entertainment Weekly  ♦  "Riveting...powerful...haunting."—The Washington Post  ♦ "Compelling for both adult and teenage readers."—New York Times Book Review  ♦  "Intimate, extraordinary, artfully crafted...brilliant."—Shelf Awareness  ♦  "Historical fiction at its very, very best."—The Globe and Mail  ♦  "[H]aunting, heartbreaking, hopeful and altogether gorgeous...one of the best young-adult novels to appear in a very long time."—Salt Lake Tribune  ♦  *"This haunting gem of a novel begs to be remembered."—Booklist  ♦  *"Artfully told and sensitively crafted...will leave readers weeping."—School Library Journal  ♦  A PW and SLJ 2016 Book of the Year

"The inevitability of the ending (including the loss of several characters) doesn't change its poignancy, and the short chapters and slowly revealed back stories for each character guarantee the pages keep turning. Heartbreaking, historical, and a little bit hopeful." —Kirkus

This feature require that you enable JavaScript in your browser.
END_OF_DOCUMENT_TOKEN_TO_BE_REPLACED

This feature require that you enable JavaScript in your browser.
END_OF_DOCUMENT_TOKEN_TO_BE_REPLACED

This feature require that you enable JavaScript in your browser.
END_OF_DOCUMENT_TOKEN_TO_BE_REPLACED