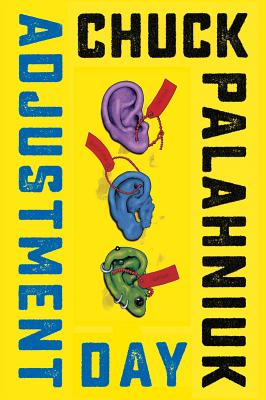 Startlingly relevant and endlessly entertaining, Chuck Palahniuk’s Adjustment Day will have you gasping, weeping, shaking in your booties and clenching the arms of your chair in anticipation. It is present-day America and things are bleak. A youth bulge - an influx of young males saturating the population - is making lawmakers and high-standing government officials nervous. Volatile and hungry for glory, youth bulges have been responsible for every economic downfall, bloody revolution, and mass tragedy in the history of the world. In an effort to cull this dangerous demographic, WWIII will be signed into existence right under the noses of the general public and bevies of young men will be sent to their bloody deaths. Little does the government know that a book has been circulating, “Adjustment Day,” and that it’s inciting anger and rebellion in the very youth they plan to massacre. Soon, Adjustment Day will be upon them, and there is nothing they can do to stop it.

The author of Fight Club takes America beyond our darkest dreams in this timely satire.

People pass the word only to those they trust most: Adjustment Day is coming. They’ve been reading a mysterious book and memorizing its directives. They are ready for the reckoning.

Adjustment Day, the author’s first novel in four years, is an ingeniously comic work in which Chuck Palahniuk does what he does best: skewer the absurdities in our society. Smug, geriatric politicians bring the nation to the brink of a third world war in an effort to control the burgeoning population of young males; working-class men dream of burying the elites; and professors propound theories that offer students only the bleakest future.

Into this dyspeptic time a blue-black book is launched carrying such wisdom as:

The weak want you to forgo your destiny just as they’ve shirked theirs.

A smile is your best bulletproof vest.

When Adjustment Day arrives, it fearlessly makes real the logical conclusion of every separatist fantasy, alternative fact, and conspiracy theory lurking in the American psyche.

A quick, horrifying descent into madness and murder, gorgeous in its psychotic build-up and over-the-top execution.
— Jason Sheehan

Palahniuk toys with our cultural dividing lines—race, class, sexuality—and all the fears, myths, and conspiracies that come along with them. The result is a novel that straddles both the horrific and the absurd, kind of like present-day America.
— Peter Rugh

Adjustment Day feels, in many ways, like a novel made out of the times we’re living in—one in which cult of personality (and a desire to belong to specific tribes) fractures the world people are familiar with, and creates something different—and worse—in its wake.

[Adjustment Day] is what you'd expect from the author best known for writing Fight Club: violent, kinetic, and deeply disturbing.

A send-up of the many absurdities in our society.
— Mackenzie Dawson

[Palahniuk] takes the United States’ divided politics to their extreme conclusion and proves along the way that his gift for social satire has only sharpened with time.

Visionary and fearless . . . perhaps [Palahniuk’s] darkest, most biting satire to date. . . . Razor-sharp insights and boundless imagination are matched only by his ability to make even the most stomach-churning scenes somehow vividly entertaining. . . . Equal parts Jonathan Swift and Tyler Durden.

A dystopian nightmare that takes all the fractures of our modern society and escalates them to a perverted climax.

END_OF_DOCUMENT_TOKEN_TO_BE_REPLACED

This feature require that you enable JavaScript in your browser.
END_OF_DOCUMENT_TOKEN_TO_BE_REPLACED

This feature require that you enable JavaScript in your browser.
END_OF_DOCUMENT_TOKEN_TO_BE_REPLACED

This feature require that you enable JavaScript in your browser.
END_OF_DOCUMENT_TOKEN_TO_BE_REPLACED