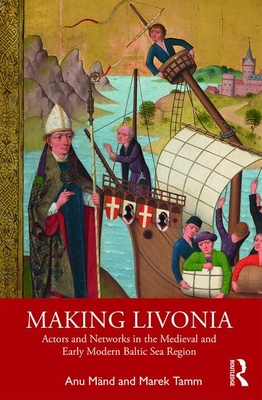 The region called Livonia (corresponding to modern Estonia and Latvia) emerged out of the rapid transformation caused by the conquest, Christianisation and colonisation on the north-east shore of the Baltic Sea in the late twelfth and the early thirteenth centuries. These radical changes have received increasing scholarly notice over the last few decades. However, less attention has been devoted to the interplay between the new and the old structures and actors in a longer perspective.

This volume aims to study these interplays and explores the history of Livonia by concentrating on various actors and networks from the late twelfth to the seventeenth century. But, on a deeper level, the goal is more ambitious: to investigate the foundation of an increasingly complex and heterogeneous society on the medieval and early modern Baltic frontier - 'the making of Livonia'.

This feature require that you enable JavaScript in your browser.
END_OF_DOCUMENT_TOKEN_TO_BE_REPLACED

This feature require that you enable JavaScript in your browser.
END_OF_DOCUMENT_TOKEN_TO_BE_REPLACED

This feature require that you enable JavaScript in your browser.
END_OF_DOCUMENT_TOKEN_TO_BE_REPLACED