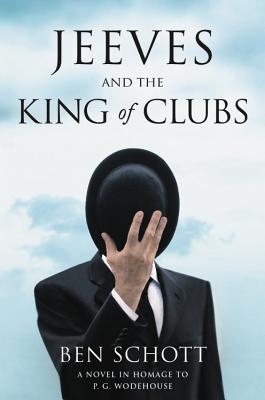 One of the most famous comic duos in literature returns in this homage to P.G. Wodehouse, creator of the inimitable Bertie Wooster and his gentleman's personal gentleman Jeeves. In this installment, The British Secret Services asks Bertie and Jeeves to help foil a plot to subvert the English government. This assignment sets the stage for multiple plot lines with well--known characters and tropes that fans of Wodehouse expect. Throughout all this, Jeeves, whose brainpower is second to none, ensures that all will be right in the end. Wodehouse is known for his metaphors and humorous dialogue, and Schott does not disappoint. Jeeves and the King of Clubs is an enjoyable, smile-a-minute escape.

What ho! A new Jeeves and Wooster novel that is "impossible to read without grinning idiotically" (Evening Standard), penned in homage to P.G. Wodehouse by bestselling author Ben Schott -- in which literature's favorite master and servant become spies for the English Crown.

The misadventures of Bertie Wooster and his incomparable personal gentleman, Jeeves, have delighted audiences for nearly a century. Now bestselling author Ben Schott brings this odd couple back to life in a madcap new adventure full of the hijinks, entanglements, imbroglios, and Wodehousian wordplay that readers love.

In this latest uproarious adventure, the Junior Ganymede Club (an association of England's finest butlers and valets) is revealed to be an elite arm of the British secret service. Jeeves must ferret out a Fascist spy embedded in the highest social circles, and only his hapless employer, Bertie, can help. Unfolding in the background are school-chum capers, affairs of the heart, antics with aunts, and sartorial set-tos.

Energized by Schott's effervescent prose, and fully authorized by the Wodehouse Estate, Jeeves and the King of Clubs is a delight for lifelong fans and the perfect introduction to two of fiction's most beloved comic characters.

Ben Schott is the New York Times and internationally bestselling author of Schott's Miscellany and the Schott's Almanac series. His first novel in homage to P. G. Wodehouse was Jeeves and the King of Clubs. A graduate of Cambridge University, he enjoyed a career as a photographer before becoming a writer. He is a regular columnist for Bloomberg Opinion and has written for a host of newspapers and magazines, including the New York Times, Playboy, Vanity Fair, The Spectator, and the London Times. He is, more often than not, to be found in his club.

One of the Best Books of the Year (Town and Country)—-

"Schott is a wonderful, exacting mimic: Bertie Wooster and his valet, Jeeves, could almost be mistaken for themselves, their exchanges sparkling and unexpected, giving real verve to this joyful, loving, humble, and worthwhile homage."—USA Today

"P.G. Wodehouse wrote almost 100 novels in his lifetime, but his most indelible contributions to the literary canon are, inarguably, the characters of Bertie Wooster and Jeeves... They are resurrected by British writer Ben Schott... it would be impossible to perfectly capture Wodehouse's particular madhouse charm but Schott comes pretty darn close... a true delight to read"—Vanity Fair

"In Jeeves and the King of Clubs, a fizzy new homage to Wodehouse, Schott infuses Bertie with extra bounce, transforming him from sheer pleasure seeker to shrewd (sort of) secret agent--no wardrobe change necessary... What can explain this contemporary renaissance of the butler and the bachelor? ... It might signal a newfound appreciation of the power of Wodehouse's levity to combat--and outlast--moments in history when affairs have taken on 'a certain menacing trend,' as Jeeves once put it... The pages of Wodehouse contain an 'empire of comic writing on which the sun has never set'... in elevating Bertie Wooster as its staunchest defender, he burnishes the gleam."—New York Times Book Review

"Schott brings it all off in high and hilarious style. Best of all, his wordplay can hold its own with the Master's."
—Booklist (starred review)

"[Schott's] sensitivity to the tics and cadences of his characters' speech and ways of being is uncannily acute, and full of the same freshness and resonance of perception as Wodehouse's own style... It vibrates with the spirit and rhythms of [Wodehouse's] heart."
—Sunday Times (UK)

"A smart, often hilarious caper that turns the duo into international spies and reminds us why Wodehouse's characters became beloved in the first place."
—Town and Country

This feature require that you enable JavaScript in your browser.
END_OF_DOCUMENT_TOKEN_TO_BE_REPLACED

This feature require that you enable JavaScript in your browser.
END_OF_DOCUMENT_TOKEN_TO_BE_REPLACED

This feature require that you enable JavaScript in your browser.
END_OF_DOCUMENT_TOKEN_TO_BE_REPLACED