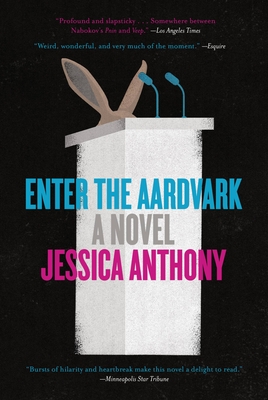 Before reading this gem of a book by Jessica Anthony, I doubt I had ever even considered the aardvark. Today it stands proudly alongside the dog and the pig in contemporary literary prominence. And this aardvark has many more lives than any cat I’ve ever known. From Victorian England to present-day Washington, DC,  you are going to be on the edge of your seat with every twist and turn of this totally original tale. AA rated!

“I’ve never read a novel quite like this one. The story connects two storylines, one revolving around the stuffing of an aardvark and the other around a repressed, Reagan-obsessed, Republican millennial congressman. What I loved most about this novel is that it’s kind of ridiculous (in a great way!) but it is also very poignant and leaves the reader changed by the end. Bravo, Jessica Anthony!”
— John McManus, Main Point Books, Wayne, PA

In this “blisteringly innovative and outrageous” (The Observer) novel that the Los Angeles Times describes as "somewhere between Nabokov's Pnin and Veep,” a young politician discovers a mysterious stuffed aardvark on his doorstep and sets out on a journey to find out what it means.

Early one August morning, millennial congressman Alexander Paine Wilson (R) receives a strange package in the mail. Inside is an enormous taxidermied aardvark. What does it mean? Well, everything. Hurtling from the beginning of the universe to present-day Washington, DC, this astonishing, edge-of-your-seat novel is at once a piercing look into the sick heart of our democracy and a profoundly moving meditation on the nature of love, power, and evil. In the end you will not only know the meaning of the aardvark, you will see our current reality through new eyes.

Jessica Anthony has been a butcher in Alaska, an unlicensed masseuse in Poland, and a secretary in San Francisco. In 2017, while writing Enter the Aardvark, Anthony was working as "Bridge Guard," guarding the Maria Valeria Bridge between Sturovo, Slovakia and Esztergom, Hungary. Normally, she lives in Maine and teaches at Bates College.

"Inventive and darkly funny...as Anthony
connects characters from today with those from 19th-century England, she offers
an original and unsettling lens through which to view male power as it has
evolved over time."—TIME

"Like A. S. Byatt with a demented sense of humor...profound and slapsticky, hilarious and depressing at once, Enter the Aardvark is brutally suited to our moment of absurd political theater...Anthony's approach to Rep. Wilson falls somewhere between Nabokov's Pnin and Veep...With her huge taxidermy needle, Anthony stitches us into the breast of our nemesis. She wants to see what insights we gain from putting on their skin...It's a thrilling ride...I'd buy another ticket."—LOS ANGELES TIMES

"Weird, wonderful, and very much of the moment, Enter the Aardvark is a landmark political novel of the Trump era...With heart and humor, Anthony expertly skewers our current political climate."—ESQUIRE

"If you've been wondering, as I have, where the spirit of Nathanael West might be in these berserk and awful times, enter Jessica Anthony. With her highly inventive, ever attentive, and morally serious (as all great comedy must be) Enter the Aardvark, she estranges all over again our deplorable political moment, and thereby helps make it bearable."—JOSHUA FERRIS, author of The Dinner Party andThen We Came to the End

"[Enter the Aardvark] holds up a funhouse mirror to our own political media in the age of spin...reminiscent of Joyce's Dubliners and the later works of T. S. Eliot, the prose quickly transitions into something more modern, but equally ambitious...The book raises some standard commentary about our relationship to politics and the media...but Anthony's reflection of ourselves goes deeper. This is a world that serves, in some ways, as a salve to readers disgruntled by the last four years."—LOS ANGELES REVIEW OF BOOKS

"Enter the Aardvark is one wild ride: a condemnation, a haunting, a song of love, a madcap political thriller-and it is absolutely unputdownable. I have long been a massive fan of Jessica Anthony's writing and this novel cements her as one of our most thrilling and singular innovators on the page. Welcome, readers, to her world."—LAURA VAN DEN BERG, author of The Third Hotel

"It's a long time since I have enjoyed a novel so
much. Fresh, witty and smart, it also has a heart. What more could
you want? And who would have thought that you could become emotionally attached
to a stuffed aardvark?"—KATE ATKINSON, author of Big Sky and LifeAfter Life

"This book is batshit insane and I love it. What do
a closeted gay Republican congressman who's obsessed with Ronald Reagan have in
common with a taxidermist in 19th-century England? Answer: an aardvark. And
also much more, but I'll let you discover the rest for yourself."— LIT-HUB

"An ingenious political
satire...The perfect tonic for testing times...Anthony's voice is all her
own: deliciously astute, fresh and terminally funny."—THE GUARDIAN

"A
blisteringly innovative and outrageous novel...If you're searching for a sharp,
looking-glass view into the far end of contemporary politics, look no further.
Jessica Anthony's novel has the pacing of a thriller with satirical verve of
Nathanael West. Beyond a fabulist send-up of our current political chaos, it's
an examination of the fall out of masculinity's rigid constraints, played out
through sexual repression and relentless power dynamics."—THE OBSERVER

"Jessica Anthony's Enter the Aardvark is a truly fresh piece of art. It is rare that a novel addresses the current political moment. With humor, intelligence and a keen eye for detail Anthony paints a frightening picture of this America. And above all else, this novel never lowers itself to preaching to the choir. This is a great satire."—PERCIVAL EVERETT, author of SoMuch Blue and Erasure

"I've been waiting a long time for a book like Jessica Anthony's Enter the Aardvark, a book that not only manages to bridge supposedly unbridgeable divides in politics, in time, in geography, in love and sex, but also manages to do so by way of a time-traveling taxidermied aardvark. If that sounds unlikely, well, yes, exactly, that's why I've been waiting for so long for it-this unlikely, hilarious, moving, ingenious book. Enter the Aardvark is an absolute original, and so is Jessica Anthony."—BROCK CLARKE, author of Who are You, Calvin Bledsoe? andAn Arsonist's Guide to Writers' Homes in New England

"Jessica Anthony is a writer possessed of mind-bending talents."—HEIDI JULAVITS, author of The Folded Clock

"The feat of a virtuoso stylist who makes the wildly impossible
seem everyday. Anthony stabs with tenderness, drags us through the
purifying muck of love, and writes a refrain that does not repeat. A novel
of riotous longing echoing across our continents and eras."—SALVADOR PLASCENCIA, author of The People of Paper

"Listen,
we're all high-key stressed about the upcoming election, so if you need to
laugh-cry at a political satire populated with queer characters and homophobic
ones, taxidermy and parallel timelines, plot twists and toxic masculinity, well
then, here you are...It's a wild ride and might just be the perfect antidote to
the wild ride we're in in real life."—ELECTRIC LITERATURE

"Politics are far from a laughing matter these days, but Jessica Anthony's irreverent and unabashedly weird novel pokes fun at the toxic hypocrisy of current-day Washington...Enter the Aardvark explores closeted gay love, human vindictiveness, and the natural history of an odd African mammal. It's a fast, entertaining read that definitely fits the bill for anyone looking for something different."—APPLE BOOKS (Best Books of March)

"Though Enter the Aardvark is certainly satire, Anthony's depiction of Wilson's repressed sexuality cuts beneath the surface. Her dissection of Wilson's political beliefs, particularly his anti-abortion stance, isn't just sharp commentary on polarization, identity and power in the U.S. It's also a poignant examination of what happens when we deny ourselves the ability to love and be loved."—TIME Magazine

"Anthony has woven the historic and the contemporary into this brilliant
and fast-paced novel. Bursts of hilarity and heartbreak make it a delight to
read. A perfect escape for this political season."—MINNEAPOLIS STAR TRIBUNE

"Anthony mixes wildly
different ingredients into her ingenious mental mixmaster in this distinctive,
quirky satire of a novel."—NATIONAL BOOK REVIEW

"Enter the Aardvark sizzles with uproarious fun, from its snout to the sting in its tale."—THE INDEPENDENT

"[Anthony's] story reels
between epochs of time and knots of characters but, in her case, with the
unsparing, high-energy atom-smasher of whip-smart, informed, biting cynicism.
Her prose is quick, almost breathless, voracious and deftly targeted."—BAY AREA REPORTER

“Jessica Anthony’s Enter the Aardvark is a glorious guffaw-fest that skewers sex and masculinity, politics and power, science and secret-keeping. Someone should deliver this madcap novel into the hands of Armando Iannucci.”

This feature require that you enable JavaScript in your browser.
END_OF_DOCUMENT_TOKEN_TO_BE_REPLACED

This feature require that you enable JavaScript in your browser.
END_OF_DOCUMENT_TOKEN_TO_BE_REPLACED

This feature require that you enable JavaScript in your browser.
END_OF_DOCUMENT_TOKEN_TO_BE_REPLACED