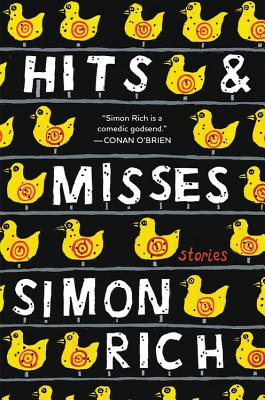 In Hits and Misses, the trappings of fame and fortune are skewered in 18 hilarious stories. Paul Revere’s horse gives us the true story behind that famous ride. A former musician with one hit song rebels against domesticity. Adolf Hitler is interviewed for a fawning GQ article. An ascetic monk sets himself apart from other monks by denying himself in increasingly outrageous ways. The author, a writer for The New Yorker, Saturday Night Live and The Simpsons, is a master of pointed observation and comic phrasing. This book will, quite simply, make you smile!

"Rich's special genius is his ability to nest an absurd premise in an otherwise ordinary situation... A perfect example of Rich's ability to mix humor and poignancy."
—Ron Charles, Washington Post

"Simon Rich is the Stephen King of comedy writing. From the first lines, he pulls you into a world of hilarious, simple, kind, determined, dumb, and bizarrely proud characters who, like all of us, are terrified of being embarrassed. He is the funniest writer I have ever met and Hits and Misses is his best collection of stories."—John Mulaney

"Simon Rich is the Serena Williams of humor writing... Rich has sharpened his satire over the years, and he now wields it with skill... Rich is at the height of his craft when he is writing on the border between comedy and tragedy."
—New York Times Book Review

Simon Rich "writes funny, short, inventive, breathtakingly precise pieces... Rich's insistence on hope, love, and that people (other than himself) are basically good is refreshing."
—The Millions

"Rich's special genius is his ability to nest an absurd premise in an otherwise ordinary situation... the tale of an actual dinosaur being laid off as a comedy writer is a perfect example of Rich's ability to mix humor and poignancy."
—Ron Charles, The Washington Post

"Flights of fancy from preternaturally gifted humorist Rich... Shades of Christopher Moore's slapstick... [and] Python-esque medieval farce... He has a sweet spot between mockery and respect for old Hollywood... lovingly crafted comedies from a writer beginning to match wit with wisdom."
—Kirkus

"Hits and Misses is full of the kinds of snappy writing and short, well-crafted situations that make perfect sense."—BookReporter

This feature require that you enable JavaScript in your browser.
END_OF_DOCUMENT_TOKEN_TO_BE_REPLACED

This feature require that you enable JavaScript in your browser.
END_OF_DOCUMENT_TOKEN_TO_BE_REPLACED

This feature require that you enable JavaScript in your browser.
END_OF_DOCUMENT_TOKEN_TO_BE_REPLACED