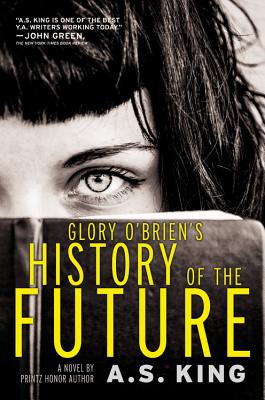 By A.S. King
Email or call for price.
Hard to Find

Glory would rather be taking pictures than have anyone truly notice her. Her neighbor Ellie is the only one she can talk to, but even that isn’t great. Then one fateful Saturday night, they drink the remains of a petrified bat which gives them the power to see details of a person’s past and future. Glory sees a second civil war with gruesome deaths and a United States that is completely different. All along the way, Glory unearths family secrets in her deceased mother’s darkroom that should have been buried with her suicide. Glory O’Brien’s History of the Future is a captivating story with twists and turns on every page.

In this masterpiece about freedom, feminism, and destiny, Printz Honor author A.S. King tells the epic story of a girl coping with devastating loss at long last--a girl who has no idea that the future needs her, and that the present needs her even more.
Graduating from high school is a time of limitless possibilities--but not for Glory, who has no plan for what's next. Her mother committed suicide when Glory was only four years old, and she's never stopped wondering if she will eventually go the same way...until a transformative night when she begins to experience an astonishing new power to see a person's infinite past and future. From ancient ancestors to many generations forward, Glory is bombarded with visions--and what she sees ahead of her is terrifying: A tyrannical new leader raises an army. Women's rights disappear. A violent second civil war breaks out. And young girls vanish daily, sold off or interned in camps. Glory makes it her mission to record everything she sees, hoping her notes will somehow make a difference. She may not see a future for herself, but she'll do anything to make sure this one doesn't come to pass.

* "An indictment of our times with a soupçon of magical realism.... Will inspire a new wave of activists."
—Kirkus Reviews, starred review

* "King continues to be one of the most original (yet accessible) YA writers today, and the magical realism element accentuates the humanity of the narrative."
—The Bulletin, starred review

"This book reminds you to get scared. It reminds you that battles fought aren't always won, that history repeats itself, that what we take for granted can easily be dismantled."
—"Birthday by Birthday, a Starter Library for Young Feminists" --BNTeenblog

"You won't be able to put down this futuristic story about a girl who starts having visions of both the past and the future-in which she sees an end to women's rights and a civil war between sexes."
—Teen Vogue

"The characters will stay with readers long after they finish the novel....Highly recommended."
—VOYA

"Glory is a wry, occasionally acerbic narrator, exhibiting the balance of truth-telling and blindness so common to smart teens. In trademark King style, the chapters alternate between daily life and troubled future, despair and humor, rage and acceptance."
—Shelf Awareness

This feature require that you enable JavaScript in your browser.
END_OF_DOCUMENT_TOKEN_TO_BE_REPLACED

This feature require that you enable JavaScript in your browser.
END_OF_DOCUMENT_TOKEN_TO_BE_REPLACED

This feature require that you enable JavaScript in your browser.
END_OF_DOCUMENT_TOKEN_TO_BE_REPLACED