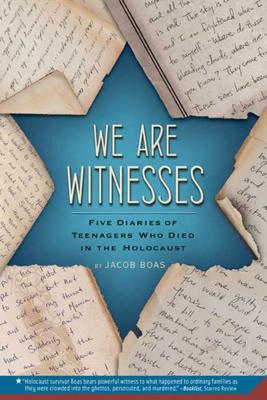 The five diarists in this book did not survive the war. But their words did. Each diary reveals one voice, one teenager coping with the impossible. We see David Rubinowicz struggling against fear and terror. Yitzhak Rudashevski shows us how Jews clung to culture, to learning, and to hope, until there was no hope at all. Moshe Ze'ev Flinker is the voice of religion, constantly seeking answers from God for relentless tragedy. Eva Heyman demonstrates the unquenchable hunger for life that sustained her until the very last moment. And finally, Anne Frank reveals the largest truth they all left for us: Hitler could kill millions, but he could not destroy the human spirit. These stark accounts of how five young people faced the worst of human evil are a testament, and an inspiration, to the best of the human soul.

Jacob Boas is the author of the young adult book We Are Witnesses:  Five Diaries of Teenagers Who Died in the Holocaust. A Holocaust survivor who was born in a concentration camp, Boas has a Ph.D. in modern European history and is a historian, writer, and translator. He lives in Portland, Oregon, with his wife.

“Holocaust survivor Boas bears powerful witness to what happened to ordinary families as they were crowded into the ghettos, persecuted, and murdered.” —Booklist, Starred Review

“The cumulative effect of the five journals is overwhelming.” —The Horn Book Magazine

“A riveting collection of texts that, rather than variations on a theme, remain stubbornly individualistic, adding up to a stereoscopic vision of the Holocaust.” —Kirkus Reviews

“We are privy to the thoughts of five adolescents who wrote about, and then died because of, the Nazis' persecution of the Jews.” —The Bulletin of the Center for Children's Books, Starred Review

“Boas ably guides the reader through these literary landscapes of hell, where none of the writers survived. . . . [These] young people make the accounts more universal, and permit us to see the common humanity of each of these different witnesses.” —Jewish Bulletin

This feature require that you enable JavaScript in your browser.
END_OF_DOCUMENT_TOKEN_TO_BE_REPLACED

This feature require that you enable JavaScript in your browser.
END_OF_DOCUMENT_TOKEN_TO_BE_REPLACED

This feature require that you enable JavaScript in your browser.
END_OF_DOCUMENT_TOKEN_TO_BE_REPLACED