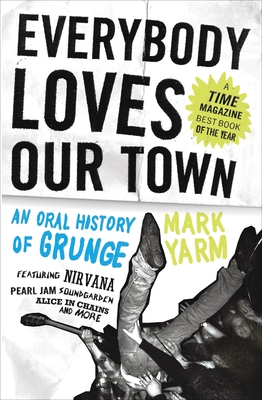 By Mark Yarm
$20.00
Email or call for price/availability

Twenty years after the release of Nirvana’s landmark album Nevermind comes Everybody Loves Our Town: An Oral History of Grunge, the definitive word on the grunge era, straight from the mouths of those at the center of it all.

In 1986, fledgling Seattle label C/Z Records released Deep Six, a compilation featuring a half-dozen local bands: Soundgarden, Green River, Melvins, Malfunkshun, the U-Men and Skin Yard. Though it sold miserably, the record made music history by documenting a burgeoning regional sound, the raw fusion of heavy metal and punk rock that we now know as grunge. But it wasn’t until five years later, with the seemingly overnight success of Nirvana’s “Smells Like Teen Spirit,” that grunge became a household word and Seattle ground zero for the nineties alternative-rock explosion.

Everybody Loves Our Town captures the grunge era in the words of the musicians, producers, managers, record executives, video directors, photographers, journalists, publicists, club owners, roadies, scenesters and hangers-on who lived through it. The book tells the whole story: from the founding of the Deep Six bands to the worldwide success of grunge’s big four (Nirvana, Pearl Jam, Soundgarden and Alice in Chains); from the rise of Seattle’s cash-poor, hype-rich indie label Sub Pop to the major-label feeding frenzy that overtook the Pacific Northwest; from the simple joys of making noise at basement parties and tiny rock clubs to the tragic, lonely deaths of superstars Kurt Cobain and Layne Staley.

Mark Yarm is a former senior editor at Blender magazine. He lives in Brooklyn with his wife, Bonnie, and is in no way related to Mudhoney frontman Mark Arm.

“Yarm’s affectionate, gossipy, detailed look at the highs and lows of the contemporary Seattle music scene is one of the most essential rock
books of recent years.”
—Kirkus Review, *Starred Review*

“Hardcore fans of grunge will treasure this.”
—Publishers Weekly

"Mark Yarm has assembled the gospels of Grunge music. Here is a warts-and-elbows refresher course for those of us who still find our memories of the era a little hazy."
─Chuck Palahniuk, author of Fight Club

"A very noble record of the grunge scene—and an excellent addition to the growing library of oral history music books."
—Legs McNeil, coauthor of Please Kill Me: The Uncensored Oral History of Punk and the forthcoming Resident Punk

"Great oral histories are rare. Hewing a narrative from all those chaotic and often conflicting memories with testimony alone and no guide-prose or stage direction is difficult. Making that somehow intimate and epic is nearly impossible. When a writer pulls it off, as Mark has with Everybody Loves Our Town, it's really a gift: the subject or scene finally gets its definitive record and the reader gains what feels like a room full of brand new friends. One of the best rock reads in a very long time."
─Marc Spitz (co-author We Got The Neutron Bomb: The Untold Story of LA Punk, music blogger VanityFair.com).

"In Everybody Loves Our Town, Mark Yarm collects and dispenses remarkable insights about a genre no one even wants to claim as their own. As a child of grunge—who spent a humiliating chunk of the 1990s in an Alice in Chains t-shirt—I loved this book; it clarified so many things about a sound and a time I thought I already knew."
─Amanda Petrusich, author of It Still Moves: Lost Songs, Lost Highways, and the Search for the Next American Music

"A deeply funny story, as well as a deeply sad story--the glorious Nineties moment when a bunch of punk rock bands from Seattle accidentally blew up into the world’s biggest noise. Mark Yarm gives the definitive chronicle of how it all happened, and how it ended too soon. But the book also makes you appreciate how weird it is that this moment happened at all."
─Rob Sheffield, author of Love Is A Mix Tape and Talking To Girls About Duran Duran

"A definitive, irreplaceable chronicle of one of rock-n-roll's greatest eras. It should sit tall on any rock lover's bookshelf."
─Neal Pollack, author of Never Mind The Pollacks

“In an attempt to trace the real roots of grunge, journalist Mark Yarm compiled an exhaustive oral history from the people who lived it. In his book Everybody Loves Our Town, there are interviews with everyone from the early adopters to those that were late to the party, but nevertheless helped extend [grunge's] shadow of influence by turning it into a look for the world to emulate.”
—The Fader

“This massively readable tome gathers recollections from every grunge band you’ve ever heard of (Pearl Jam, Nirvana, Soundgarden, Melvins) and some you haven’t (we hardly knew ye, Skin Yard)…The genre’s first truly comprehensive insider history…It’s gossipy…and fascinating, with so much backstabbing and death it’s like Shakespeare, if Shakespeare had written about heroin addicts with bad hair.”
—Revolver (4 out of 4 stars)

“An impressive display of reportorial industriousness… It’s the feel-bad rock book of the fall.”
—Bloomberg Businessweek

“Oral history is an art in itself. It’s why Everybody Loves Our Town will endure as a classic of monumental scale.”
—Paste Magazine.

“For hardcore fans or people just curious about what the fuss was all about, Mark Yarm’s excellent new book –Everybody Loves Our Town: An Oral History of Grunge” is well worth the read. Yarm has done an admirable job of assembling an engaging, funny and ultimately sad narrative by letting the people who helped create the Jet City sound talk about what happened in their own words."
—Seattle Post-Intelligencer

“Yarm’s account captures the essential tension that made the era so compelling.”
—Greg Kot, Chicago Tribune

"We finished all five hundred and forty-two pages of this book in two days, abandoning all responsibility (this, friends, is why we do not have children; had there been any children about us, we would have locked these unfortunate creatures in the bathroom, so as to not be distracted) and staying up until two in the morning, reading whole chunks of it out loud to poor long-suffering Support Team."
—TheRejectionist.com

Mark Yarm's superb book, Everybody Loves Our Town: A History of Grunge details the dramatic rise of the grunge movement and all of its players, including Cobain, Love and Vedder, told through the voices of the people that lived through it."
—Hollywood Reporter

“I came away from this book with a big smile on my face. Lots of it is like a gray day in western Washington; you’ve been kicked out of yet another band, and your girlfriend is spending far too much time with the drummer from the Melvins or the Screaming Trees. In the end, though, “Everybody Loves Our Town" made me want to be young, stupid and lucky again. Mainly, it made me want to be young.”
—The Washington Post

“Everybody Loves Our Town should inspire new conversations about the unique culture and people that made grunge so unusual and unforgettable to so many fans. The book is timely, as 2011 marks the 20-year anniversary of  Nirvana’s “Nevermind” and Pearl Jam’s multi-platinum debut album, “Ten.” Everybody Loves Our Town is as good an excuse as any to put on an Alice in Chains CD and curl up with a good book about some great old friends with whom we haven’t spent much time in a while.”
—The Washington Independent Review of Books

"Like a very extended and entertaining all-night bulls--- session among everyone who mattered during the late-'80s/early-'90s music scene."
—Seattle Weekly

"The scope is encyclopaedic and the closeness to the subject unparalleled."
—Record Collector

"A wild ride that is in turns uplifting and tragic."
—Your Flesh

"Riveting, gossipy, and impossible to put down until the last quote has been read."
—New York magazine's Vulture blog

“This exhaustive oral history features unknowns, cult figures, supporting players and stars; each gets the time he or she deserves as Yarm pieces together the arc of a scene that built itself from scratch, blossomed beyond most people's dreams, and then crashed. Yes, there are plenty of Kurt Cobain stories. But there's much more, too— indelible characters, weird scenes, creative chaos, laughs and tragedy and lots of cheap beer.”
—NPR.org

“This volume could have been a huge, snarky compendium of gossip and score settling from the inhabitants of a claustrophobically insular local music scene. And it is, but in the best possible way—and it’s also much, much more…. Yarm has culled the story of grunge from the people who created it, and their testimony is remarkable for its eloquence and its passion and its fairness and its anger.”
—Lev Grossman, Time (named one of the magazine's Top 10 nonfiction books of 2011)

“A Herculean work of interviewing and editing which gives everyone a voice, from the biggest stars to the lowliest foot soldiers… . Though the Seattle scene’s stew of folly, feuding, rampant drug addiction and a startling number of fatalities might have made for a voyeuristic tale, Yarm leaves the reader full of empathy for young men and women swept up in a cultural moment they couldn’t control.”
—The Guardian (named a best music book of the year)

“Exhilarating … Mark Yarm’s brilliant and exhaustive oral history of grunge is full of … vivid observations. Some 250 interviews with those intimately associated with the most unlikely musical sensation of all time piece together a story that is hilarious and tragic and utterly gripping.”
—Sunday Times of London

A Gawker.com Best Thing We Read All Year selection

“[A] lively, funny, melancholy and exhaustive oral history … For all its eventual compromise and dissolution, Seattle was brieﬂy an exhilarating pop cultural moment to rank with the greats. Yarm’s labour of love has well and truly done it justice.”
—Time Out London

“If you loved the ’90s and you haven’t read this book, you MUST. I’m absolutely obsessed with Mark Yarm’s masterpiece right now.”
—USAToday.com’s Pop Candy column

"Full of so many entertaining stories and thrilling anecdotes that we have read it cover-to-cover TWICE. You should do the same!"
—VH1.com

This feature require that you enable JavaScript in your browser.
END_OF_DOCUMENT_TOKEN_TO_BE_REPLACED

This feature require that you enable JavaScript in your browser.
END_OF_DOCUMENT_TOKEN_TO_BE_REPLACED

This feature require that you enable JavaScript in your browser.
END_OF_DOCUMENT_TOKEN_TO_BE_REPLACED