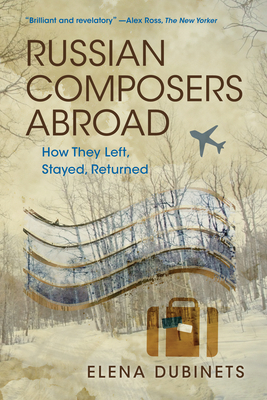 As waves of composers migrated from Russia in the 20th century, they grappled with the complex struggle between their own traditions and those of their adopted homes.

Russian Composers Abroad explores the self-identity of these migr's, especially those who left from the 1970s on, and how aspects of their diasporic identities played out in their music. Elena Dubinets provides a journey through the complexities of identity formation and cultural production under globalization and migration, elucidating sociological perspectives of the post-Soviet world that have caused changes in composers' outlooks, strategies, and rankings.

Russian Composers Abroad is an illuminating study of creative ideas that are often shaped by the exigencies of financing and advancement rather than just by the vision of the creators and the demands of the public.

Elena Dubinets is Artistic Director of the London Philharmonic Orchestra. She previously held top artistic planning positions at the Atlanta and Seattle Symphony Orchestras. Dr. Dubinets has initiated more than a hundred commissions, organized tours to four continents, and overseen multiple Grammy-winning recording projects. She has taught at universities in the United States, Russia, and Costa-Rica; published five books; and written hundreds of articles and liner and program notes. She received her MA and PhD degrees from the Moscow State Tchaikovsky Conservatory in Russia and has lived in the US since 1996, moving to London in 2021.

This feature require that you enable JavaScript in your browser.
END_OF_DOCUMENT_TOKEN_TO_BE_REPLACED

This feature require that you enable JavaScript in your browser.
END_OF_DOCUMENT_TOKEN_TO_BE_REPLACED

This feature require that you enable JavaScript in your browser.
END_OF_DOCUMENT_TOKEN_TO_BE_REPLACED