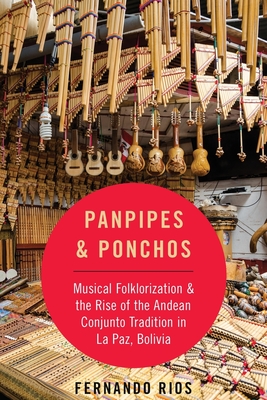 Melodious panpipes and kena flutes. The shimmering strums of a charango. Poncho-clad musicians playing El C ndor Pasa at subway stops or street corners while selling their recordings. These sounds and images no doubt come to mind for many world music fans when they recall their early
encounters with Andean music groups. Ensembles of this type -- -known as Andean conjuntos or pan-Andean bands -- have long formed part of the world music circuit in the Global North. In the major cities of Latin America, too, Andean conjuntos have been present in the local music scene for decades,
not only in Peru, Bolivia, and Ecuador (i.e., in the Andean countries), but also in Argentina, Chile, Colombia, and Mexico. It is solely in Bolivia, however, that the Andean conjunto has represented the preeminent folkloric-popular music ensemble configuration for interpreting national musical
genres from the late 1960s onward. Despite its frequent association with indigenous villages, the music of Andean conjuntos bears little resemblance to the indigenous musical expressions of the Southern Andes. Created by urban criollo and mestizo folkloric artists, the Andean conjunto tradition represents a form of mass-mediated
folkloric music, one that is only loosely based on indigenous musical practices. Panpipes & Ponchos reveals that in the early-to-mid 20th century, a diverse range of musicians and ensembles, including estudiantinas, female vocal duos, bolero trios, art-classical composers, and mestizo panpipe
groups, laid the groundwork for the Andean conjunto format to eventually take root in the Bolivian folklore scene amid the boom decade of the 1960s. Author Fernando Rios analyzes local musical trends in conjunction with government initiatives in nation-building and the ideologies of indigenismo and
mestizaje. Beyond the local level, Rios also examines key developments in Bolivian national musical practices through their transnational links with trends in Peru, Argentina, Chile, Mexico, and France. As the first book-length study that chronicles how Bolivia's folkloric music movement
articulated, on the one hand, with Bolivian state projects, and on the other, with transnational artistic currents, for the pivotal era spanning the 1920s to 1960s, Panpipes & Ponchos offers new perspectives on the Andean conjunto's emergence as Bolivia's favored ensemble line-up in the field of
national folkloric-popular music.

Fernando Rios is Associate Professor in Ethnomusicology at the University of Maryland. His research interests include Latin American (especially Bolivian) folkloric, indigenous, and popular music; folklorization and nation-building; music and social-political movements; the politics of culturalappropriation; and historical ethnomusicology.

This feature require that you enable JavaScript in your browser.
END_OF_DOCUMENT_TOKEN_TO_BE_REPLACED

This feature require that you enable JavaScript in your browser.
END_OF_DOCUMENT_TOKEN_TO_BE_REPLACED

This feature require that you enable JavaScript in your browser.
END_OF_DOCUMENT_TOKEN_TO_BE_REPLACED