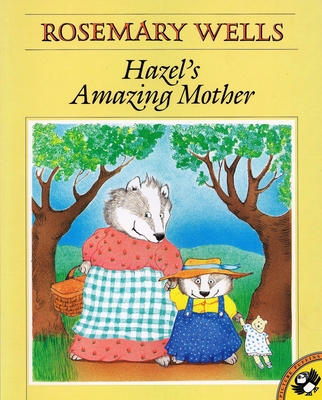 A heartwarming story about the power of a mother's love from the bestselling creator of Max & Ruby.

Hazel is out for a walk with her beloved doll Eleanor. But when she makes a wrong turn, she encounters some kids who are up to no good. Fortunately, Hazel's amazing mother is there to rescue her--and set the bullies straight--just in the nick of time.

"A beguiling book with a nonsensical streak that will make children look again and laugh."--Booklist

Born in New York City, Rosemary Wells grew up in a house "filled with books, dogs, and nineteenth-century music." Her childhood years were spent between her parents' home near Red Bank, New Jersey, and her grandmother's rambling stucco house on the Jersey Shore. Most of her sentimental memories, both good and bad, stem from that place and time. Her mother was a dancer in the Russian Ballet, and her father a playwright and actor. Mrs. Wells says, "Both my parents flooded me with books and stories. My grandmother took me on special trips to the theater and museums in New York.

When I was two years old I began to draw and they saw right away the career that lay ahead of me and encouraged me every day of my life. As far back as I can remember, I did nothing but draw."

A self-proclaimed "poor student," Wells attended the Museum School in Boston after finishing high school. It was, she recalls, "a bastion of abstract expressionism an art form that brought to my mind things I don't like to eat, fabrics that itch against the skin, divorce, paper cuts, and metallic noises."

Without her degree, she left school at 19, married, and began a fledgling career as a book designer with a Boston textbook publisher. When her husband, Tom, applied to the Columbia School of Architecture two years later, the couple moved to New York, where she began her career in children's books working as a designer at Macmillan. It was there that she published her first book, an illustrated edition of Gilbert & Sullivan's I Have a Song to Sing-O.

Rosemary Wells's career as an author and illustrator spans more than 30 years and 60 books. She has won numerous awards, and has given readers such unforgettable characters as Max and Ruby, Noisy Nora, and Yoko. She has also given Mother Goose new life in two enormous, definitive editions, published by Candlewick. Wells wrote and illustrated Unfortunately Harriet, her first book with Dial, in 1972. One year later she wrote the popular Noisy Nora. "The children and our home life have inspired, in part, many of my books. Our West Highland white terrier, Angus, had the shape and expressions to become Benjamin and Tulip, Timothy, and all the other animals I have made up for my stories." Her daughters Victoria and Beezoo were constant inspirations, especially for the now famous "Max" board book series. "Simple incidents from childhood are universal," Wells says. "The dynamics between older and younger siblings are common to all families."

But not all of Wells' ideas come from within the family circle. Many times when speaking, Mrs. Wells is asked where her ideas come from. She usually answers, "It's a writer's job to have ideas." Sometimes an idea comes from something she reads or hears about, as in the case of her recent book, Mary on Horseback, a story based on the life of Mary Breckenridge, who founded the Frontier Nursing Service. Timothy Goes to School was based on an incident in which her daughter was teased for wearing the wrong clothes to a Christmas concert. Her dogs, west highland terriers, Lucy and Snowy, work their way into her drawings in expression and body position. She admits, "I put into my books all of the things I remember. I am an accomplished eavesdropper in restaurants, trains, and gatherings of any kind. These remembrances are jumbled up and changed because fiction is always more palatable than truth. Memories become more true as they are honed and whittled into characters and stories."

Mrs. Wells says, "Most of my books use animals rather than children as characters. People always ask why. There are many reasons. First, I draw animals more easily and amusingly than I do children. Animals are broader in range--age, time, and place--than children are. They also can do things in pictures that children cannot. They can be slapstick and still real, rough and still funny, maudlin and still touching.

In Benjamin and Tulip, Tulip falls out of a tree and mashes Benjamin in the mud. If these pictures were of children, they would be too close to violent reality for comfort, and all the humor would be lost."

Her writing career has been a "pure delight," she says. "I regret only that I cannot live other lives parallel to my own. Writing is a lonely profession and I am a gregarious sort of person. I would like someday to work for the FBI. A part of me was never satisfied with years of tennis. I still yearned to play basketball."

"A beguiling book with a nonsensical streak that will make children look again and laugh."--Booklist

END_OF_DOCUMENT_TOKEN_TO_BE_REPLACED

This feature require that you enable JavaScript in your browser.
END_OF_DOCUMENT_TOKEN_TO_BE_REPLACED

This feature require that you enable JavaScript in your browser.
END_OF_DOCUMENT_TOKEN_TO_BE_REPLACED

This feature require that you enable JavaScript in your browser.
END_OF_DOCUMENT_TOKEN_TO_BE_REPLACED